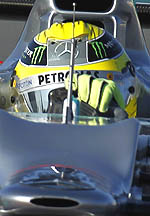 After weeks of murmuring, the controversial DRS wing on the Mercedes W03 has been officially protested.

Although the FIA has twice deemed the rear wing to be legal, a number of teams have continued to dispute the ruling. Today, Lotus finally stuck its head above the parapet, protesting the device under article 3.15 of the Technical Regulations.

This states that: "With the exception of the parts necessary for the adjustment described in Article 3.18, any car system, device or procedure which uses driver movement as a means of altering the aerodynamic characteristics of the car is prohibited."

A brief statement issued by the Enstone based outfit reads: "Lotus F1 Team, by means of this document, formally files a protest concerning the scrutineers of the meeting's decision regarding Cars No: 7 and 8 on 12th April 2012, relating to their conformation to article 3.15 of the 2012 Technical Regulations

"This protest is pursuant to Articles 171-179b) (chapter XII) of the FIA International Sporting Code. A deposit for the amount of 2,000 euros has been lodged with the FIA in anticipation of this protest. The FIA is hereby authorised to use this deposit as the fee for this protest in accordance with Article 17.1 of the 2012 Formula One Sporting Regulations.

"For and on behalf of Lotus F1 Team"

The device in question basically makes use of the DRS device on the rear wing to stall the front wing, thereby increasing straight-line speed.