The true value of Lotus F1 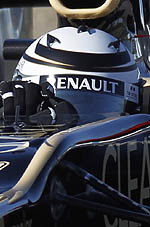 We realise that Pitpass' recent article on the Lotus F1 team may have left some readers a little confused.

After all, whilst Lotus F1's ultimate owner Gerard Lopez went to great pains to tell one of the sport's websites that the team's sponsorship deal with Group Lotus has been terminated, Pitpass' business editor Christian Sylt revealed here that in fact, Group Lotus' parent company, Proton, has given the team a huge loan so, since it will still carry the name of the historic marque, the new development changes little both internally and externally. Likewise, whilst Lopez also announced that Group Lotus no longer has an option to buy 50% of Lotus F1, Pitpass revealed that if the team fails to repay the loan to Proton then Group Lotus' owner will get not just 50% of it but effectively 100%.

As Pitpass pointed out, by taking a business story to a sports journalist the door was opened to follow up reports just like this so, for the sake of transparency, we are attaching here the key documents relating to the Proton loan. They will be eye-opening for any budding F1 team owner.

The first page (pdf) confirms that this relates to "a debenture dated 3 February 2012 made between the Company (formerly known as Lotus Renault GP Limited) and the Lender (as defined below)." The second page (pdf) confirms the key point that "the Company charges with full title guarantee in favour of the Lender by way of first fixed charge... as continuing Security for the payment and discharge of the Secured Obligations all of the Company's rights to and title and interest from time to time in the Plant and Equipment, Real Property and Work-in-Progress." In itself this proves the existence of the loan and the fact that it is secured on plant, equipment, property and work-in-progress meaning that the lender will get all this if the money is not repaid. However, how do we know that Proton is the lender and just what exactly is the plant, equipment, property and work-in-progress?

So, we know that the items which Proton's loan is secured on are set out on sheets 5 to 18 and they could well be useful to prospective F1 team owners. In total, Lotus F1's plant, equipment, real property and work-in-progress has a value of £44.9m as revealed in our previous report. However, we now spell this out in detail. Want to know what is in Lotus F1's machine shop? Click this link (pdf - use rotate function). Want to know when the items in the machine shop were manufactured? Just click on the link. How about finding out what is in the team's R&D test room and its rapid prototyping department? It is on the link. The names of the manufacturer of the key parts of the team's windtunnel are also on the link along with the dates they were manufactured. There are two pages showing items of computer equipment belonging to the team with a value of over £5,000 each. Then comes a list of improvements being made to the team's property as well as assets under construction which include a gantry for the windtunnel and new software for the driver simulator.

There is no indication that the loan from Proton has been settled yet and, until it is, there is a risk that the manufacturer could end up with all these items if Lotus F1 fails to repay the money. Bearing this in mind, Group Lotus seems to be in a better position now than before when its owner had the option to buy 50% of the team. Either Proton will get its money back or ownership of the team's most important assets. Time will tell which route it goes down.