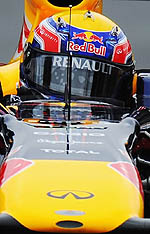 Mark Webber: On the second pit stop, we fitted the option tyre again to try and cut the race down to something different; it was certainly worth a bit of a punt. The two DRS zones are tricky here; in the first one it was easy to get the move done, but in the second one you couldn't, so if I passed Jenson there, he could just get you back again. I think it was a bit of a gimmick today the DRS, it was difficult to make the move stick and harder to get the move done, as I say in Turn 11. I had a pretty good pace on Jenson anyway at the end of the first stint, he went one lap shorter than us which was no problem, but then we had a bad first pit stop, so we lost a lot of time with that. It put us on the back foot. I got the car back onto the leaders, but we were out of position by then.

Sebastian Vettel: On the exit of the first corner, everything seemed fine and then turning into the second corner I could feel that something was odd on the rear right. I had to catch the car surprisingly and then the second time, I couldn't do it anymore, as I'd lost too much air in the rear right tyre. I had a puncture and spun off. When I got back to the pits, the resulting suspension damage meant we couldn't carry on. There wasn't anything we could have done better really this weekend; we just need to look at what had caused the puncture. I had a good start and I was very happy with the car up until that point. To lose the race there, so early on, it hurts for sure. There wasn't much we could do, so after that I took the opportunity to learn a little bit on the pit wall.

Christian Horner, Team Principal: After such a great qualifying yesterday, it was a really frustrating race. Sebastian made a perfect start and had a clear lead into the first corner and then an instantaneous loss of pressure in the tyre made him a complete passenger. The resulting suspension damage from that meant there was no alternative but to retire the car today. For Mark, he was in a close scrap with Jenson. On the first pit stop we had a wheel nut issue and thereafter it dropped him behind Felipe Massa, so at that point we opted for a different strategic route and a three stop race, which was the only opportunity to take on and beat Massa and to have a go at Jenson. Unfortunately there just weren't enough laps to pull out a big enough gap, but it was worth a go and Mark drove well. Fourth was ultimately the best we could achieve today. So, at a track that's been so good to us for the last two years, it's frustrating to have our first DNF of the year due to a tyre issue. Congratulations to Lewis on a strong drive today.

Cyril Dumont, Renault: A disappointing day. It's a shame that we finished the race with Seb out of Turn 1 already with a puncture. Looking at Mark's race, I think it was pretty solid. We decided to swap to a three stop strategy to undercut Massa and it worked pretty well. It's the first time that we are not on the podium this year and we'll come back stronger in Brazil.