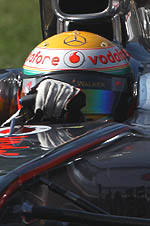 Despite the never ending praise from drivers, team bosses, sponsors and pretty much everyone else that has a vested interest, for us, and many fans, Abu Dhabi remains one of the major blots on the F1 landscape.

No offence to the country or its people is intended, however, the fact is that street circuits just aren't suited to Formula One racing. Right hander - short straight - left hander - straight - right hander just isn't conducive to good racing.

The backdrop, with its pristine white sculptured buildings and setting sun is magnificent, however, the circuit remains as characterless and soulless as one has come to expect from such ventures. Perhaps it is the constant hyperbole from the aforementioned vested interest brigade that makes it some much worse here.

Last year, and no disrespect to Sebastian Vettel is intended, the world championship fight became a mockery courtesy of the layout of this dreadful track - not forgetting Ferrari's poor strategy. Though the championship has long been decided, tracks such as this should never be used for season finales for no matter the outcome of the race the on track 'action' is always something of an anti-climax.

This year, courtesy of two DRS zones - one of which has already been extended - the situation, in terms of overtaking, is equally bleak, with Mark Webber leaving the BBC red-faced yesterday when he predicted that today wouldn't be much of a race.

"I don't know how exciting the race is going to be to be honest," he told Lee McKenzie, who was keen to assure viewers that there was plenty to tune in for. "Hmm, I don't know," insisted the Australian, adding that the best hope for a good race was for McLaren to "stir things up on the first lap".

Sadly, barring a major shock/incident on the opening lap, it looks to be much of the same, as Vettel starts from pole ahead of the McLaren duo. If ever a circuit produced racing that sees the finishing order decided at the first corner, this is it, consequently, at shortly after 17:00 today (local time) a lot of F1 fans could find themselves switching channels, heading out to the garden, down the pub or even find time to ask their partner how their week has been. For the rest of us it could be a long afternoon… it's not as if we can even expect a sudden downpour.

However, just because we're not expecting a thriller doesn't mean that there isn't a lot to fight for today. Ignoring the fight for the runner up spots in the drivers' and constructors' championship, let's not forget that a number of drivers have yet to secure seats for next season while the all important constructor standings - which decide the allocation of prize money and perks - sees Renault, Force India, Sauber and Toro Rosso involved in a titanic, intriguing battle for fifth.

Tyre this weekend are medium (prime) and soft (option), the Italian manufacturer, which claims that tyre degradation is not an issue here, is expecting most drivers to opt for two stops spending as much time as possible on the softs.

That said, by the time drivers get around to using the harder compound it will be much cooler - the sun is already very low in the sky - which will obviously effect handling.

Having not run in qualifying, Rubens Barrichello starts from the back row alongside teammate Pastor Maldonado who incurred a ten-place grid penalty after exceeding his engine allocation. A sad day for Williams and indeed Barrichello who looks to be contesting his penultimate Grand Prix.

Di Resta is on the harder compound, as are the Williams duo, Kobayashi and Senna.

After a long, long wait, especially for those at the front, they're away.

Out front Hamilton leads Alonso, who nails Button in the first corner with a hard, brave move, Webber remains fourth while the Mercedes duo continue to battle for sixth.

Replay shows Vettel had the puncture going into Turn 2 having probably damaged it clouting the kerb at the first turn. Back in the pits it is all over for the world champion, his first retirement of the year, the right-rear of the car badly damaged by his flailing tyre.