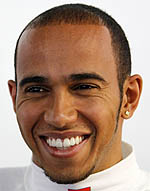 While McLaren were quickest in both of yesterday's sessions, Red Bull were up there and appeared comfortable. With Pirelli using the two sessions to test an experimental soft tyre, direct comparisons were difficult.

While Ferrari, particularly in Massa's case, continues to have problems with its wobbly front wing, a problem which totally baffles the Maranello outfit, it was clear that Alonso was really having to fight the car in order to keep it on track. Indeed, in the latter stages of the session the Spaniard went off and hit the barriers… in exactly the same spot where Vettel had gone off earlier.

Drivers, team bosses and sections of the media continue to hype the Yas Marina circuit, but for us it remains characterless and totally uninspiring, the over generous run-offs making a mockery of any comparison with tracks such as Monaco.

When the lights go green it is Senna who leads the way, followed by Alguersuari, Buemi, Trulli, Ricciardo, Kobayashi and Kovalainen.

Five minutes into the session, all have been out, Button, Webber and Hamilton the last to take to the track.

D'Ambrosio is the first driver to emerge for a second run, the Belgian unsure whether he has a seat next season - a situation not helped by the fact that Jean-Eric Vergne was in his car for yesterday morning's session.

As the Virgin driver begins his first flying lap, Kovalainen and Perez head down the pitlane.

D'Ambrosio posts 1:49.573, however, having gone quickest in the first two sectors it's clear that Perez is about to go a lot faster. Indeed, the Mexican crosses the line at 44.566, over five seconds quicker than his Belgian rival. Kovalainen goes second with a 46.777.

Massa is the first of the big guns to go out, though Hamilton and Button soon join him.

Perez improves (43.905) and di Resta goes second, but a 43.132 sees Massa go straight to the top of the pile. Back in the pits, mechanics are still working on Alonso's and Webber's cars.

Button re-takes the top spot with a 40.993 while Massa's 42.162 reclaims third. Still no times from Trulli, Vettel, Alonso or Webber.

Lotus report that gearbox problems for Trulli mean that he will not be running in this session. A disaster for the popular Italian.

With 33:10 on the clock, the Red Bulls and Alonso are finally on track. Currently, the McLaren duo have a 1s advantage over their nearest rival (Massa).

Having improved to third (41.416), Vettel goes quickest in S1, however, a poor second sector means he fails to improve. Moments later, he is leapfrogged by teammate Webber who crosses the line at 40.995.

Perez goes fifth (41.794) the Mexican the first to switch to the soft (option) rubber.

A 40.938 sees Vettel go quickest, the German having completed 6 laps on this run.

Replay shows Alonso lose it between 5 and 6, the Spaniard lucky not to clout the bollards. Elsewhere, Barrichello, who suffered an engine failure yesterday, has an oil leak.

Having gone quickest in the two final sectors, Hamilton goes quickest, the 2008 world champion crossing the line at 40.661.

Massa is back on track on softs, the Brazilian having switched back to his original non-wobbly front wing. The Ferrari driver immediately goes quickest (40.631), Rosberg, also on softs, going third (40.670).