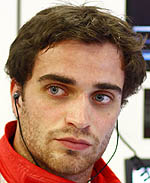 Marussia Virgin Racing drivers Timo Glock and Jerome D'Ambrosio qualified in 20th and 22nd positions respectively in Abu Dhabi today, but will start the only twilight race on the Formula One calendar - the Abu Dhabi Grand Prix - from 19th and 21st after the grid shakes out with penalties.

Another hot and sunny day greeted the teams for the final 60-minute free practice session, with an air temperature of 27°C and a track temperature that climbed to 42°C. After an early installation lap, both Timo and Jerome were out on track again 12 minutes later, continuing to fine-tune their set-ups as well as practising qualifying runs. Timo completed 23 laps and Jerome, 22.

The track temperature fell to 31°C as the sun went down during qualifying. Both Timo and Jerome were out at the start of the session for their first run, before returning to the garage for another set of Pirelli P-Zero soft tyres. Timo was first back out for his final three lap run. He completed nine laps. Jerome went for a single timed lap and completed eight laps.

Timo Glock: "Today the car was a bit more difficult to drive than yesterday. We already struggled this morning with the braking - I just didn't have the confidence to go to the maximum and push. Depending on the corner, the rear end behaved differently, making it quite difficult for me to judge. But my qualifying lap was a good one and I am happy to be in front of HRT and pleased with the lap. It was good and no mistakes. But I'm sure that if we have more confidence in the car we can push more, so we have to look into this and understand why it changed overnight."

Jerome D'Ambrosio: "I had a reasonable qualifying today. I didn't get the perfect lap but equally it wasn't such a bad one. I'm looking forward to the race tomorrow as my set-up was oriented more towards the race rather than optimised for qualifying, so I like to think there is more to come. This is a special race track with the timing of the qualifying and race, as the reference points are gradually changing as the light is falling. I hope we can have a good two-car finish for the team."

John Booth, Team Principal: "A good result for the team in qualifying today. Jerome progressed well over the course of this morning and it was pleasing to see him opting for the bold strategy of a single hot lap right at the end of the session. Timo was less happy with the car on his first run in qualifying and this forced him to be slightly more conservative with a final three-lap run. Looking at his time, and correcting it to a more optimal single timed lap, I think we can be pleased with where we are relative to our competitors. We spent a lot of time before coming here analysing our performance in recent races in order to make the most of the last two rounds of the season. As a consequence, we took the decision yesterday to focus our set-up towards the race rather than qualifying, so we're optimistic that we can enjoy a strong two-car finish tomorrow. As always here in Abu Dhabi, the track and its spectacular backdrop will add an extra special dimension for ourselves and the fans."