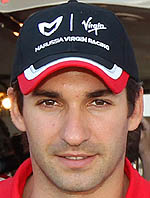 The first two Free Practice sessions for the Abu Dhabi Grand Prix took place today at the Yas Marina Circuit, where Marussia Virgin Racing Reserve Driver Robert Wickens got the chance to take part in the morning session as a reward for winning the 2011 World Series by Renault FR 3.5 Championship.

Robert made his Formula One weekend debut, becoming the first Canadian since Jacques Villeneuve to do so. Alongside Timo Glock, Robert was out for an early installation lap before returning to the garage for the usual systems checks. 32 minutes into the session he set his first timed lap and from then on continued to get to grips with the MVR-02 and the track. Due to a driveshaft problem, Timo wasn't out on track again until the last 35 minutes of the session, completing a total of 20 laps. Robert completed 23 laps.

In the afternoon Jerome D'Ambrosio was back at the wheel of car number 25 and joined Timo for the second Free Practice session of the day. The sun went down and the floodlights illuminated the Yas Marina Circuit, with the track temperature cooling down to 28°C. Timo continued to prepare for the race ahead, completing a further 34 laps, while Jerome, who was initially struggling with lack of grip, completed his first 32 laps of the weekend.

Timo Glock: "This morning I had a bit of trouble. I had a technical problem so I had to wait a bit longer to go out on track. So it was a bit of a difficult first practice, the car wasn't that great and it needs a different set-up here to what we were running in the past. So it was a little difficult to get anything out of the car. At the end I also had to do some system checks which made it hard for me to improve my lap time. So it wasn't the best of starts to the day. FP2 was a more standard programme. We made some set-up changes that proved to be a better direction and made the car more driveable. It was good to see Robert in the car today. I think it is well-deserved after winning the World Series Championship. So it was a great day for him I'm sure."

Jerome D'Ambrosio: "It was a busy FP2, trying to complete as many laps as we could and I tried to get as much information as I could, as well as fine-tuning the car. The last run was positive. I think we are heading in the right direction and the work we have done today should definitely make tomorrow a better day."

Robert Wickens: "Today was great. It was a good learning experience and everything felt good - I've been with the team for a while now and I felt comfortable, going quicker and quicker every lap. So it's been a promising first ever practice session, I'm close to Timo and I think I can only be happy with the job I've done today. I can't wait to get back in the car again next week during the Young Driver Test."

John Booth, Team Principal: "Robert acquitted himself very well this morning. He made good progress throughout the session and worked well with his engineers to get a good basic understanding of the car. I'm sure he will be pleased to have a good grounding before his full day of testing next week. With Timo in FP1, we found an issue on the right hand side driveshaft after the installation lap. This involved a fair amount of strip and rebuild during the session, which was completed relatively quickly and lost him little time. He continues to be developing the set-up in new directions, which may seem quite odd at this time in the season, but this is just a demonstration of his tenacity. Obviously Jerome needed to hit the ground running in FP2 and he struggled initially, particularly with one set of the development tyres. However, by the final Soft tyre run, he seems to be happier with the car, although there are a few key corners which need looking at overnight. Overall, a positive busy day for the team. I'm sure with a clean FP3 session tomorrow, we will continue to improve.