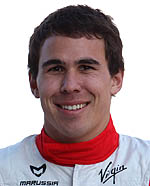 Robert Wickens will take part in the first Free Practice session of the Abu Dhabi Grand Prix as a reward for winning the 2011 World Series by Renault Formula Renault 3.5 Championship.

Wickens' FR3.5 challenge was supported by Marussia, who decided that his success in securing the title was deserving of the opportunity to test the car in a race weekend environment.

He took part in a straight-line test for Marussia Virgin in September in Vairano, where he helped the team gather data for its aerodynamic evaluation programme. His role next Friday will provide a continuation of this experience but in the more critical context of a Grand Prix, where his feedback will have a direct benefit on the team's race weekend performance.

The Canadian will run alongside Timo Glock and in place of Jerome d'Ambrosio. It will be business as usual in the afternoon as d'Ambrosio returns to the cockpit at a track he is very familiar with.

"Robert has had a fantastic season in Formula Renault 3.5 and was the deserving victor of a hard-fought Championship," said John Booth. "One of the founding principles of our Young Driver Programme was that we would reward success with important seat time to aid the progression of our rising stars through the ranks. Abu Dhabi is a track at which Jerome has good experience as he ran there in the same Friday morning practice session a year ago and then in the Young Driver Test the following week. The Yas Marina Circuit therefore presents a better opportunity to provide this reward to Robert as there will be less impact on our engineering programme. We are also finalising our line-up for this year's Young Driver Test in Abu Dhabi and will announce this next week, but there again we look forward to putting the next generation of talent through their paces in what will be a tough test of their potential to progress to the highest level of motorsport."

"I'm thrilled to be given the opportunity to test with the team in a race weekend context and at a track like Abu Dhabi," added Wickens. "This year just keeps getting better and better and I can't thank Marussia enough for their continued support. The Vairano test was a good grounding for me but the opportunity to kick things up a gear in a Free Practice session is obviously the next big step in my career and I hope my feedback will have a positive benefit on the team's performance there."