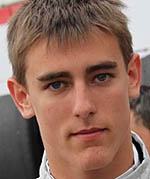 Toro Rosso has named the two drivers it will run at the forthcoming Young Driver test in Abu Dhabi.

At the forthcoming young driver test which runs from 15 to 17 November at the Abu Dhabi circuit, Scuderia Toro Rosso will run Stefano Coletti and Kevin Ceccon (right).

Stefano Coletti, who was born in Monaco on 6 April 1989, has competed in the GP2 Asia and GP2 Main series this year, although his race season was cut short after an accident at the Spa-Francorchamps GP2 meeting. He was back in the cockpit for October's GP2 test at Barcelona, topping the time sheet at the end of the final day.

Kevin Ceccon from Italy, was born on 24 September 1993 and this year he won the Under-21 category of the Auto GP Championship before going on to take the overall title in the same series. He also drove in the GP2 Main series, the youngest driver ever to do so.

"Toro Rosso is well used to training young drivers and we are pleased to add Coletti and Ceccon to the list of students who have been through the Toro Rosso school," said Franz Tost. "Neither of them is part of the Red Bull Young Driver Programme, which is down to the fact that those drivers currently on the programme are still too young and inexperienced to deal with a Formula 1 car."