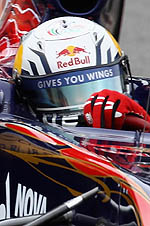 Jaime Alguersuari: "I am very happy with the performance of the team overall as this race was another good one for us, with a pace that was as quick as the one we had shown in Korea. I managed to pass Senna and then Sutil because of this. I was also ahead of the Saubers and I think this result reflects where we should be in the order. It is encouraging that we could out perform the Renaults. Once again the team did a great job in preparation work, in the sessions and in the pit stops and it looks like we are on the right road. I am very happy to have scored four points which puts Toro Rosso on the same total as Sauber. I am looking forward very much to the next two races as I think that if we do a good job we can end the year ahead of them. It's a shame that Sebastien did not finish, both for him and for the team. But I am sure he will back in the points soon."

Sebastien Buemi: "I am very disappointed with what happened this afternoon, because I was having a very good race, after an excellent qualifying yesterday. When the car stopped, I had just passed Hamilton, I was lying eighth and I think we could have finished in the top eight. So when you go from that promising situation, to a non finish with no points, it's a bit difficult to take. However, if we look on the positive side, our pace all weekend has been good, confirming the step forward we showed in Korea. So now we have to work hard and keep going in this direction for the final two races when I hope to be back in the points again."

Franz Tost: "Starting from ninth and tenth, after one lap Jaime was eleventh and Sebastien was twelfth. Then they both did a good job, passing Senna on lap 10 and 12 respectively, before making another passing move, this time on Sutil, on lap 14 and 15. From then on, Buemi had a strong pace and was doing quite good lap times until he was sidelined with a technical failure that we are going to investigate. Once Jaime was in front of Sutil he was able to up his pace and did a really good job from then on, as did the team in the pit stops. The four points we get today means we have caught up with Sauber, equal on points although they are officially ahead still in the Constructors' classification. It means we are also a bit closer to Force India. We must concentrate for the last two races, as the opportunity to do well and score more points is within our grasp. Finally, well done to the organisers of the first ever Indian Grand Prix, which was an interesting debut event and suggests that India has a real future on the Formula 1 map."