Vergne to contest FP1 in Korea 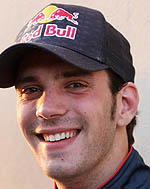 Jean-Eric Vergne, who last weekend finished runner-up in the World Series by Renault Championship at Barcelona, will drive for Toro Rosso in the first free practice session at this weekend's Korean Grand Prix.

The Frenchman, who has come through the ranks of the Red Bull Junior Driver programme, will take over Jaime Alguersuari's car for the 90 minute session. Alguersuari sits out the session because the last time a driver was replaced on Friday morning, it was Sebastien Buemi who gave up his seat to Daniel Ricciardo.

Vergne will not drive at the Indian Grand Prix, because this is a new circuit and therefore both regular drivers will be given the maximum amount of track time. He will return in Abu Dhabi, replacing Buemi. At the final round of the season in Brazil, whichever of the Toro Rosso drivers has the least points will give up his seat to Vergne for FP1.

Vergne, who won the French Formula Renault 2.0 Championship in 2008 and the British F3 Championship in 2010, made his F1 debut at last year's Young Driver Test in Abu Dhabi, finishing seventh on his first day and ninth on the second before encountering an engine issue.