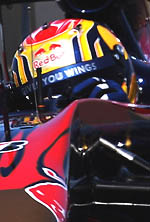 Jaime Alguersuari: ..., so we can say this was a good qualifying for the team. We did a good job, starting yesterday when the car felt fine in the wet. I think we now have a better understanding of some of the upgrades we introduced in Suzuka and made the most of them. I was also encouraged by the long run I did, as there was not as much tyre degradation as we had expected, so this issue should not trouble us tomorrow. I am expecting a lot from the race in which I hope we can score enough points to close up the gap to Sauber, who are starting behind us on the grid. As for the incident this morning with Vettel, it's clear to me what happened: I was on a long run, he was on his fast lap, so I let him by. Then he made a mistake so he was behind me, but he caught me again. Having already let him by once, I pushed for another lap on my long run. You cannot keep letting one driver pass you. I know it would have been easier for him if I had moved over again, but I also had a job to do to get enough data, because we had no information regarding a long run in the dry because of yesterday's rain. I'm sorry about that, but they have to understand my point of view too."

Sebastien Buemi: "I am reasonably happy with my performance in today's qualifying, even if thirteenth is not where we really want to be. However, we are getting very close to Q3 which is very important. Being two tenths off getting into the top ten is a sign that the car is improving. I am sure I could have done a bit better, but this still looks good for tomorrow, especially considering we had a strong long run in free practice this morning, during which we got a good idea about tyre degradation. This means we should be well prepared for the race, in which we have every reason to believe we can get a good result."

Giorgio Ascanelli: "I am pleased with our performance today, because this was a good result also considering we were given no presents by other teams underperforming. Maybe we could have squeezed a bit more out of the package we had, but there's no need to be sore about that. We might have been able to get one car in Q3 and we missed out on that by a fraction, although you have to consider that in our part of the grid there were three cars within two hundredths of a second. I am pleased with the way the cars went and the way the drivers handled the session, getting clear laps. It's going to be an interesting race tomorrow. We can expect tyre degradation of course, but the sun and how much cloud cover we see will have a significant effect on what happens. I must congratulate Pirelli on being ambitious in their choice of Soft and Supersoft tyres, for which they have been rewarded with mild temperatures and overcast skies: both tyres worked well and tomorrow we will see that track temperature will be another important factor in the race."