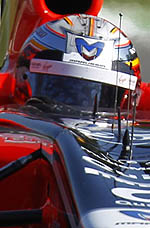 Marussia Virgin Racing's Jerome D'Ambrosio crossed the line in 16th position today in the inaugural Indian Grand Prix in New Delhi. It was a less fortunate outcome for Timo Glock however, who was forced to retire after Kamui Kobayashi drove into him.

Timo got caught up in the melee that took place at the start of the race into Turn 1. He pitted straight away as his front wing was damaged, but had to make a second visit to the pits one lap later and retired.

Jerome got off to a clean start and was able to avoid contact. After a first pit-stop on lap 22, he went back out on another set of Pirelli P-Zero Soft tyres. He didn't pit again until lap 55, this time for the Hard tyre, and a bold strategy paid off as he ended up ahead of HRT.

Jerome D'Ambrosio: "In the end we did what we had to. The team did a great job with the strategy and I pushed hard to close the gap. But it wasn't an easy weekend for me. It was a bit strange in terms of the tyres. On the one hand this was good because we could do very long stints without any degradation, but on the other hand it wasn't optimum for the beginning of the race and qualifying. Generally, I think we can all be happy with where we got to in the end today."

Timo Glock: "An unlucky day again today after a disappointing qualifying yesterday. I just came down into Turn 1 on the outside and all of a sudden I saw bits flying around. I braked a bit earlier than normal and when I turned, suddenly Kamui Kobayashi drove straight into me and I couldn't avoid the crash. My front wing was damaged so I came back in to change it, and we realised that we also had quite a lot of damage on the left side of the car, so we decided to stop."

John Booth, Team Principal: "After a challenging start to the weekend, it all came good in the last few laps of this incredible circuit, where our strategy came to fruition for Jerome. In most of our pre-event work, we had identified that only a handful of laps on the Hard tyre would be the way to go, however, in a racing situation, sometimes it is difficult to hold your nerve. Nonetheless, the engineers selected and executed the best direction and having trailed Karthikeyan in the mid part of the race, we certainly made the right call to stop on the penultimate lap in order to get ahead of him. Jerome did a great job in the laps leading up to this point to ensure we built the gap we needed whilst he still had the benefit of the Soft tyre.

"On the flip side, the weekend has continued to be frustrating for Timo. He showed a great deal of promise on Friday but since then he simply hasn't had the opportunity to demonstrate what he could do. I have no doubt that he will put these difficulties behind him and come back fighting again in Abu Dhabi. Jerome's result was a good reward for the team's efforts here and at the factory this weekend, where there will now be a busy week ahead to prepare for the next race."