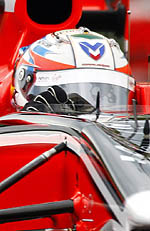 In the morning, with a track temperature of 38°C and an air temperature of 23°C, Timo and Jerome started the session with an early installation lap before going out again to continue optimising their set-up for tomorrow's race. After a first run, the session was stopped due to a red flag caused by Bruno Senna. The action resumed at 11:33 but it wasn't until the last 20 minutes that Timo and Jerome went out on track again to continue refining the car, ending with a final run on the Pirelli P-Zero Soft tyres. Timo completed 16 laps and Jerome, 17.

Both Timo and Jerome were among the first out at the start of the qualifying session for two runs on the Pirelli P-Zero Soft tyre, setting their fastest lap in the dying moments of Q1 and adding a further 15 laps to the team's tally.

Jerome D'Ambrosio: "It was a good Saturday. We had a very good last lap, something which is difficult to achieve here. You want to push hard, but you still have to think, as it's all about priorities and working out which corners to sacrifice. I'm pretty happy about today, especially because we turned it around - yesterday was a difficult day and we managed to do well at a track like Suzuka. I'm really happy. I worked well together with the engineers and I think that thanks to this combination we improved the car and my driving."

Timo Glock: "For me I think it was a good qualifying session. Going from Free Practice 3 to Qualifying was a bit blind again because we tried something overnight which didn't really work out as we had hoped, so we had to go back on that between sessions. In the end the car was really good and my lap was pretty spot-on. There's not much to say apart from I think today Jerome was slightly quicker and he did a good job. I'm happy with the car so we'll see what happens tomorrow."

John Booth, Team Principal: "After probably one of Jerome's more challenging Fridays, he spent a lot of time last night going through the data with his engineers to see where he needed to improve. Throughout P3 he did an impressive job to close the gap to Timo and into qualifying he had a good second run to finish 0.07s ahead of him. We anticipated a reasonable level of track improvement throughout Q1 so we left the final run right until the end with only one timed lap, which worked out perfectly for the traffic and enabled both drivers to get the most out of the car. Timo reverted to his P2 set-up for qualifying, having tried a slightly different direction in FP3 which proved not to be the way to go. We've seen the track throw up many incidents during the course of the three practice sessions so tomorrow we'll be looking to ensure that both cars have a clean race and are in a position to take advantage of any opportunity."