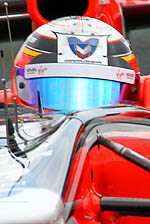 The first two Free Practice sessions for the Singapore Grand Prix got underway today and Marussia Virgin Racing's Timo Glock and Jerome D'Ambrosio completed their first laps of the weekend at the only night race on the calendar.

The first session started with a 30-minute delay as some of the temporary kerbing at turns 3 and 14 had come loose. Once repaired, the session got underway at 1900hrs, with the stewards deciding to shorten the session to one hour. Down by 30 minutes on the clock, it was necessary for the team to spend as much time as possible on track. Jerome was one of the first out and Timo followed him soon after. With 31 minutes remaining, the session was red-flagged due to a brake fire on Kovalainen's car and all drivers were confined to the garage. Timo was already back, having suffered a puncture after being hit by Webber. Another red flag was deployed with only eight minutes to go, as more kerbing came loose, this time at turns 7 and 8. When the session restarted, Jerome went out on track again, completing a total of 13 laps, while Timo stayed in to save tyres after having completed only six laps.

The second Free Practice session was all about making up for lost time. With an air temperature of 30°C and a track temperature of 31°C, this was a more useful session, with Timo and Jerome completing 25 laps each. Unfortunately, halfway through the session, Jerome broke his front wing and damaged the floor after hitting the kerb hard. He was at least able to get back on track for the final part of the session.

Timo Glock: "Not a great first practice session. It was a pretty short one due to the problems on the track and then the incident with Webber, which in the end made us lose a lot of time. The rear left tyre was punctured and I didn't run again as we didn't want to waste a set of tyres in FP1. FP2 wasn't great but it was slightly better. We did some variations in terms of set-up and the direction is not bad, but it's still difficult on a long run as we suffer on the rear tyres. We have to look into it and try to fine-tune the car for tomorrow."

Jerome D'Ambrosio: "An interesting day getting back into Singapore mode. This is the first time I have had proper night running, so it's very different - it's quite warm and the race will definitely be long. It's definitely going to be interesting. In terms of my performance today, I'm quite happy. FP1 went okay, even though we lost a bit of time - but we all did. FP2 started well with a race simulation. The only negative point is that on the new tyre run, on my Supersoft tyres, I went a bit wide on the kerb and damaged a bit of the front wing and the floor, as well as having to abort that lap because of the yellow flags. I came in and they repaired everything, but when I came back out the floor wasn't optimal anymore and I definitely lost some performance on the tyres. So we will have to look into this and I'm sure it will be an interesting qualifying tomorrow."

John Booth, Team Principal: "At this type of circuit you always hope that your practice sessions are going to go exactly to plan in order to maximise track time and enable the drivers and engineers to arrive at the optimum set-up. So it's fair to say that it's been more than a little frustrating. Whilst we've collected some good data on higher fuel runs for the tyres with both drivers, what we ultimately missed out on with both cars was the low-fuel Supersoft run. Unfortunately both drivers had started their laps when the yellow flags came out for Buemi. We thought the Yellow would be out for some time given the position of his car so we aborted both cars' runs and in doing so we effectively missed the sweet spot of the tyre life when we went back out. We've spent quite a bit of the day stepping through some combinations on the upgrade package but mainly to help with the engine cooling demands of this circuit. We now look forward to a smooth FP3 tomorrow and getting some better qualifying runs completed."