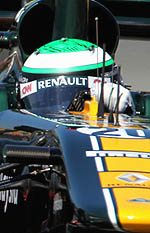 Heikki Kovalainen: "I had another good start, maybe not quite up there with the last two races, but avoided the problems in turn 1 and 3 and from there I had a really strong race. At one point I was running 10th and the car felt great all afternoon. I was still in it after the first stops and as the fuel level dropped I was able to keep pace with Senna ahead, and keep a gap to the cars behind, but when I went onto the hards it was much harder to keep up the pace. I was also seriously held up by the HRTs when they had blue flags shown to them. I think they held up Lewis as well and they definitely cost me quite a lot of time. I probably wouldn't have finished any higher, even without them holding me up, but when we're pushing as hard as we are, and fighting with midfield cars, it's a good feeling, for me and the whole team."

Jarno Trulli: "The bad luck struck again. I had a pretty good start but then one of the HRT's hit me from behind as we came out of turn three and that was basically the end of my race. I had a puncture and had to do almost a full lap to get me back to the pit, so from that position there wasn't anything I could do. I think the car suffered some damage to the floor when I was hit as the balance had completely gone for the rest of the race and I just couldn't put any decent times in. Despite that this has been another good weekend for the team. Our reliability has been strong, Heikki's pace in the race was good so I just hope I have better luck in the last two races and help make sure we secure tenth in this year's championship."

Thierry Salvi, Renault Sport F1 Support Leader: "For us that was another strong performance from the whole team on a track that pushed the engines pretty hard. Obviously it was a shame that Jarno's race was compromised so early on but with Heikki he was able to race as high as tenth up to the halfway point which is very encouraging. It looks like we found balance we were working on, with good top speed for the first half of the lap and maximising the driveability and responsiveness of the engines for the second part of the lap, so we leave India feeling pretty satisfied with the job we have done on this new track."

Mike Gascoyne, Chief Technical Officer: "A mixed result today for us. Unfortunately Jarno's race was effectively ended on the first lap when an HRT crashed into the back of him, causing a rear puncture and causing damage to the rear floor, so all he could do today was make sure he brought the car home. Heikki drove a very strong race on a two stop strategy, running the soft tyre for the first two stints and then going on to the hard to the end of the race. He was fighting with the midfield all the way through and brought the car home to record another strong finish. Yet again we showed the progress the team has made throughout the season and we are continuing our strong end to 2011. Now we have two more races to look forward to - two more chances for us possibly to score our first point, but, more importantly, to finish tenth."

Riad Asmat, Group CEO: "First I want to say on behalf of the whole team what a great job the Jaypee Group and everyone here has done to put on a truly spectacular first Indian Grand Prix. From our perspective we leave here reasonably pleased with how the race went - Heikki had another fantastic drive today and made the most of the opportunity to race with the cars around him. Jarno was unlucky to be hit by the HRT after he had made a good start, but the main thing for us this weekend is that we have crossed off another race and are a step closer to finishing tenth. That is the primary goal for us this season and we are nearly there."