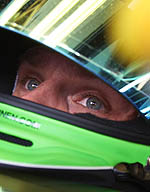 Heikki Kovalainen: "After the fantastic performance last weekend in Japan this is another big step forward for us - finishing 14th today, ahead of both Saubers and within touching distance of Senna on the final lap is for sure our strongest ever race and it's a great feeling for me and the whole team to see us fighting with a big group of cars right from the very first lap. I had another amazing start, passing a bunch of cars into turn 1 and making it look like they were all in reverse. From there I had a good first stint on the options, managing to look after them well enough to stay out for an extra couple of laps that really helped in the first stop. We went onto the primes, and my pace on them was just fantastic, good enough to help me match the times of the cars ahead right up to about tenth. The second set of primes we put on were exactly the same - the wear rates were totally manageable and I could really push on every lap. We knew there were a few cars ahead who would struggle to get to the end, and if I'd had another half a lap I would have passed Senna for sure. As it was we finished ahead of both Saubers on pace and strategy and that's a very good feeling. We've been strong all weekend and it's great for the whole team that we're heading towards the end of the season with a car that is giving us a chance to really show what we can do. Honestly, I'd like to get straight back in now and do it all over again - now I can't wait for India!"

Jarno Trulli: "That was a really strong race for us, definitely the best of the season, and I want to congratulate the whole team for the work they've done here and back at the factory for giving me and Heikki a car that we can really race with. For me, the start wasn't so good - I lost a few places into the first corner but I made them back up again quickly on the first set of tyres, and when we changed to the primes my times were great. Heikki and I were keeping pace with the midfield and easily pulling away from the cars behind, but then in my second stop I had a bit of an issue with traffic in the pitlane which lost me a bit of time and brought me out just behind where we wanted to be. As soon as the blue flags started coming out late in the race I had to slow up, and if I hadn't had those problems I'm sure I could have finished with Heikki ahead of Kamui and Sergio. Despite that it's been a good weekend, and now we have another three races to build on today's performance and finish the season as well as possible."

Thierry Salvi, Renault Sport F1 Support Leader: "We can all be delighted with where we finished today. From the engine perspective we definitely got as much performance out of the car as we could, and seeing both drivers matching the times of the cars ahead shows we keep making improvements right across the car. The drivers have given their all today, and it is good that we can help provide them with the right package to extract as much performance as possible, particularly around a track like this that demands high top speed and good traction - we were not losing any time to our nearest rivals in either the high or the low speed sectors, so I think we leave here feeling very pleased with how we have performed."

Mike Gascoyne, Chief Technical Officer: "A really excellent race and a great performance from the whole team. I know we said that last week in Japan was our strongest ever race but we have managed to improve once again and to beat both Saubers and match the pace of a group of teams ahead is very satisfying indeed. We started both cars on options and then switched onto the primes for the second stint and it was immediately obvious that they were going to degrade much less than we had thought which made the two stop strategy work. Jarno had a very strong middle stint but was unlucky to be held up, dropping him back into the traffic that ultimately meant he finished further back than he could have done. Heikki had a very good start and then drove well throughout the whole race. Towards the end we could see that the Renault's tyres had given up and we kept telling Heikki to push. He was making up about six seconds a lap over the last two laps and with one lap more I am sure he would have passed him as well, but that does not take anything away from the job we have done today. We are having a very strong end to the season and now we need to make sure we continue this run in the last three races."

Riad Asmat, Group CEO: "What a race! We are all thrilled with how we have performed today, right across the team. Our strategy was good, our pace was strong and the pitstops were excellent. We keep on improving, and to do so as we near the end of the season shows how serious we are about building on the foundations we have laid for future success. We could have settled for where we were - well ahead of the two teams behind us and just about keeping contact with the teams ahead, but today we showed that we can really race. It feels good, right across the whole team, to know that we can mix it with teams whose combined experience and budgets far exceeds what we can work with, and it shows enormous promise for next year and beyond. We want to do this again in India, and in the last two races, and show that we have really joined the fight. After today, I am sure we can."