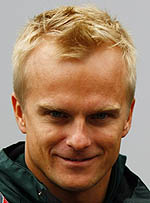 Heikki Kovalainen: "This morning was basically a write-off. You could see that the whole pitlane had the same idea - limit the running on full wets as we're not going to learn anything of real value for the rest of the weekend and avoid any issues that create unnecessary work. This afternoon the track at least dried enough for us to put in some laps on the inters, and we managed to complete some of the plan on the engine maps, so it wasn't all bad. The balance felt fine, and I think it'll be a totally different story tomorrow when it'll be a very busy FP3 for everyone and we can see how the two compounds of slick tyres behave in the dry."

Jarno Trulli: "To be honest today was just one of those days that we sometimes have in F1. The conditions meant we didn't really have a chance to try too much as the forecast is for dry running tomorrow and Sunday, and when the track's as wet as it was this morning, and we can only run on inters in the afternoon, there's not a lot we can learn. We did a bit of work on the engine driveability in FP2, and at least we now know how the car's behaving on the inters so if the forecasts are wrong we have banked some data, but I think a dry track tomorrow will suit us and we can pick up where we left off in Japan."

Karun Chandhok: "I do seem to be a little jinxed with the rain… I think Monza and Suzuka were anomalies as every time I get in the car the rain seems to hammer down, but I just have to deal with what's put in front of me, and so it was again today! Despite the limited running in FP1 I still got a sense of how good this circuit is but today it was simply about keeping it on the track and making sure I didn't make any mistakes in pretty treacherous conditions. I think the pace was pretty good for the one run I did and certainly the last two Fridays have given me a lot more confidence in the car than I had a couple of months ago."

Thierry Salvi, Renault Sport F1 Support Leader: "The weather conditions today basically made our job pretty hard. We wanted to work on the engine driveability and while we managed to do a bit on that we definitely were not able to complete the program. This circuit requires us to have both very good top speed and good traction out of the slow corners. The long straight from T2 to T3 means we have to have the right top gear to both attack cars ahead under the tow, and defend from those behind and make allowances for the wind which can change quickly here and affect outright pace. We also need to make sure we give the drivers good traction out of the slow corners and good rear stability from the blown floor so I think that will be the main areas for us to work on tonight to prepare for what will be a very busy session tomorrow morning."

Mike Gascoyne, Chief Technical Officer: "Obviously the weather today made it a tricky Friday for everyone, but despite that Karun managed to complete a good run this morning and did another solid job for us around a track that is new to him. In the second session the conditions improved and we ran reasonably competitively on the intermediates. We put both cars onto the supersofts for the last run but it was immediately obvious that the track had not dried out enough to find out anything useful from the final laps, so now we will hope the forecasts for dry running tomorrow and Sunday are right and we can have another successful weekend as we did last time out in Japan."