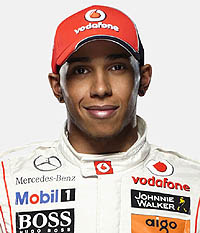 Lewis Hamilton: "The track is fantastic - the organisers here in India have done a great job. It's very fast and flowing, the grip-level is fantastic, the run-off areas seem to be good, and the kerbs are probably the best of any circuit we visit: nice rumble-strips that you can drive on. Like any brand-new circuit, it's been gripping-up throughout the day.

"We looked quick this morning. This afternoon, however, I had a problem with the driveshaft - it felt like it was causing some wear and tear so it prompted me to end the session a little early. We'll fit a new gearbox for tomorrow, so the car will hopefully start behaving a bit better. That should make things closer at the front.

"Sunday's race will be a long one. Nevertheless, there will be opportunities to overtake: it's a high-downforce circuit and, although it'll be very hard to follow other cars closely, the double-DRS zone should make it a bit easier. We'll get a clearer idea tomorrow of just how quick we really are."

Jenson Button: "I really like this circuit. It's great fun to drive. There are some tough corners, like Turns Three and Five, but there's also a lot of high-speed stuff and it feels a lot faster than we initially thought it would.

"What's also been quite a surprise is the amount of grip out there, particularly in the faster corners where the downforce is really working for you. And, because the high-speed corners are pretty smooth, you can really carry a lot of speed through them.

"It's difficult to get the tyres up to their optimal working temperature range, but, once they're in the operating window, the high-speed grip is phenomenal. From Turn Five onwards, the track is actually very quick. We'll have a lot of fun this weekend and we're hopefully going to be fighting for the win on Sunday."

Martin Whitmarsh, Team Principal: "First of all, I want to congratulate the promoters here in Delhi for having created a truly excellent circuit. The drivers love it, and the teams' facilities are very good too. And of course India, whose population is second in magnitude only to that of China, is a hugely important new addition to the Formula 1 calendar.

"As is often the case when the Formula 1 circus travels to a brand-new circuit, today was a day of experimentation. As it happened, the circuit offered up more grip than we'd anticipated, which required a set-up review early on.

"I think we've got a little more work to do in order to unlock our latent first-lap performance, but Jenson in particular completed an extremely encouraging long run. By contrast, Lewis's long run was interrupted by a driveshaft issue, which unfortunately prevented him from being able to complete it. Now, we'll analyse our findings from today, and tomorrow we intend to convert that analysis in to a strong qualifying performance."