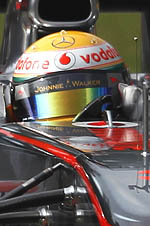 Lewis Hamilton: "Throughout the year, I don't think my qualifying performances have been too bad - it's only in the last two races that I didn't manage to get my final run in Q3 - so today's result wasn't entirely unexpected. Still, we've been quick as a team and never stopped making improvements to the car. I'm so, so proud of all the men and women both here at the circuit and back at Woking who've worked so hard to get us back to where we want to be.

"Of course, pole position is still only the first step, particularly when we know that tomorrow's race will be long and unpredictable. Pole is always a great achievement and I'm particularly proud to have achieved it at the team's 700th Formula 1 grand prix.

"We've been working to improve our starts, and I hope we can convert pole into the lead tomorrow. The grand prix's going to be tough, and it'll be difficult to beat the two guys starting immediately behind me, but I hope to keep the lead and control the race in a responsible way. I now want to put all my energy into the race."

Jenson Button: "Congratulations to Lewis - he's been very quick and has been all weekend and I just couldn't quite get close enough to him this afternoon.

"On my final run, I think I lost some ground in the last corner: I hit the limiter at the apex and lost a bit of time, but I feel good in the car. Third position isn't where I want to start, but we can have a good race from there: there are a lot of long straights on this circuit, especially after the start. With a headwind from Turn Two to Turn Three, there could be a lot of action on the first lap - I'm looking forward to that!

"Our car is feeling good this weekend. As a team, we've done a great job - and I'm particularly grateful to the guys in the garage who worked extremely hard last night to switch my chassis. Thanks guys.

"We're slightly heading into the unknown tomorrow as we haven't run high-fuel yet. Off the line tomorrow, we'll need to get a feel for how the cars behave on high-fuel, and then we've got to focus on what we're doing to the tyres over the course of a stint.

"We have all the ingredients for a fantastic race. Even more encouragingly, if we continue this way, fighting for poles and wins, then it'll be a really good way to end the season and the perfect basis for 2012."

Martin Whitmarsh, Team Principal: "Obviously, it feels great to be on pole, particularly if you haven't had it for some time - and we've missed a few that we felt we should have had this year - but it's not the full celebration yet.

"Both Lewis and Jenson did a great job this afternoon and we're in a reasonably strong position. I also think we've got a decent car balance, although it's a little bit of an unknown just how the tyres are going to survive.

"I think it's going to be an intriguing race with some interesting tyre decisions and some exciting strategies. I think it could go any way between ourselves, Red Bull Racing and Ferrari - but I nonetheless think both of our guys will fancy their chances tomorrow."