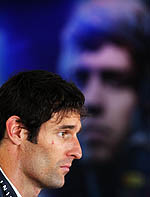 His teammate may have wrapped up his second world championship, but Mark Webber insists he's "as hungry as he's ever been."

Speaking to the Daily Telegraph on Wednesday the Australian moved to ease suggestions that he's considering retirement - his current deal with Red Bull finishes at the end of next season. Recent reports had suggested re-signing with the back-to-back constructors' champions was Webber's only hope of remaining in the sport, allegations he was quick to dispel.

"If you had asked me in my late twenties would I be still driving at 36, I'd say it would have been very, very unlikely. What does become apparent is retirement is incredibly over-rated, particularly if you're doing well.

"What was amazing this year was the amount of response I had from other teams when I was about to sign with Red Bull," he claimed. "They were very, very interested in having a chat to me, which was another little reminder that things were going pretty well."

In truth, a berth at Red Bull was the only truly competitive drive available, with all the other leading teams having already finalised their 2012 driver combination. It means another year with the Milton Keynes squad he joined in 2007, and another season alongside Sebastian Vettel.

"He is obviously on top of his game right now. He's nailed the regulations and loved how the car has been this year," Webber admitted. "He's done a phenomenal job and smacked it down the middle of the fairway every single time. He has lifted the bar for all of us.

"You need to get everything right, in terms of the championship," he continued. "You also need momentum to swing your way. But he is beatable next year. Yes, it's possible, absolutely. I've seen enough, and knowing how close it is, it's possible."