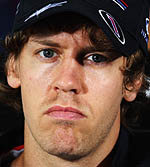 World champion Sebastian Vettel has escaped punishment after being adjudged as having cut a corner during Q3.

The incident happened during the slowing down lap after the German posted his first time in Q3, a time he was to beat on his second run and which was to secure him second position on the grid - the first time that a car other than a Red Bull has claimed pole this season.

A statement issued by the Race Stewards reads: "Having heard from the driver and team manager, and having noted that Car 1 started what was its fastest qualifying lap with 17 seconds to spare prior to the chequered flag, the stewards determined that no advantage was gained when car 1 left the track.

"Accordingly no breach of Article 20.13 occurred on this occasion and the stewards decide to take no further action", it concluded.

The incident took place betweens Turns 4 and 6, Vettel, having made a mistake, using the escape road that links the two rather than returning to the track.

With a number of similar incidents having taken place over the course of the weekend, the stewards confirmed that Charlie Whiting will be issuing instructions to the drivers ahead of the race, warning them against the use of the exit road at Turn 4.