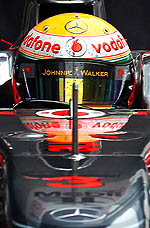 Lewis Hamilton: "It's great to see the Vodafone McLaren Mercedes team with both cars on the front two rows - it's a sign that there's real pace here now. Everyone in the team is doing a fantastic job and we were genuinely competitive today.

"At one stage during Q3 I was up: I had half a tenth in reserve. But then I went a little bit wide, which triggered a big oversteer moment, and the result was that I lost that crucial bit of time. But the points aren't given out for today, and I'm feeling good about tomorrow.

"I'm very excited about the race, in fact, because we had quite a good long run yesterday and we'll work hard to build on that pace overnight and take it into tomorrow. We're in the fight - and, with a good start, we can definitely challenge for the win."

Jenson Button: "All in all, I guess I'm pretty happy with P3. I'll start from the clean side of the track, and I'm feeling very positive about the race.

"Having said that, after a lap that was as close to pole as mine was today, you always catch yourself thinking that there must have been a little bit here or a little bit there that would have been enough to bridge the gap, which was just two-tenths this afternoon, but to be fair to myself I actually think I drove a pretty decent quali-lap.

"To be honest, qualifying has been a bit of an issue for me recently - and, although I relish attacking any circuit in an effort to make up places on a Sunday afternoon, I guess you're always going to be playing catch-up if you start much farther back than the first two rows. So, this weekend, it's nice to be in a position to drive for a win from the outset, and that's definitely what I'll be attempting to do tomorrow."

Martin Whitmarsh, Team Principal: "When your drivers qualify second and third, inevitably you're a little disappointed that you didn't bag pole position and such is the case today; however, the positive corollary of that statement is that pole position was indubitably within our grasp this afternoon.

"Lewis ran a little wide in the final turn on his last attempt to take pole position, but his was a good lap all the same and he'll start from the front row tomorrow. Jenson qualified well too, ending up just behind Lewis in P3 - which will put him on the clean side of the grid.

"The team has done a professional and disciplined job both yesterday and today, and we're confident of being able to mount a serious challenge for victory tomorrow. Our long runs were good yesterday, our starts have been strong in recent races, and Lewis came through today's qualifying having conserved an extra set of new Option tyres which should give him a small advantage in the race.

To check out our Hungary qualifying gallery, click here.