Perez and Bianchi to test Ferrari 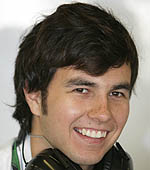 Sergio Perez and Jules Bianchi are to take part in a head-to-head test for Ferrari later this year.

The pair will drive the Maranello outfit's 2009 car in September, though the venue has yet to be arranged.

The test was revealed by Luca Baldisserri, head of the Italian outfit's driver academy, in an interview with the team's website.

"We will be back on track in September, at Mugello or Fiorano," he said. "It will be a very interesting test, because we will be putting Bianchi and Perez up against one another. I think they will both be very motivated and for us it will be the perfect opportunity to assess both drivers."

While Perez has impressed in his debut season with Sauber, Bianchi has struggled in GP2, though he did win the feature race at Silverstone last weekend.

The test will add to speculation concerning Felipe Massa's future with the Italian team, the Brazilian, like Bianchi, is managed by Nicholas Todt.