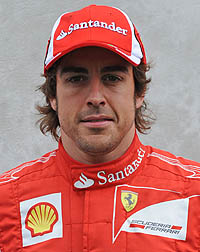 First win of the year for Scuderia Ferrari, thanks to Fernando Alonso on the very same track where, sixty years ago, Jose Froilan Gonzalez took the team's first ever win. Today's victory is number 216 from 821 starts for Ferrari, of which 16 of them have come at the British Grand Prix. This is Fernando's second victory at Silverstone, his 27th win from 168 starts, which puts him level with Jackie Stewart in fifth place in the list of all-time winners. Today's result means that a Ferrari driver has been on the list of winners every year for the past eighteen championships.

Luca di Montezemolo: At last! Hearing the Italian National Anthem being played at Silverstone, the same venue at which we won our first ever Formula 1 race, was something I found particularly emotional. This is Ferrari, a team that never stops fighting, never throws in the towel, at the top level for sixty years. I want to thank Domenicali and the whole team, both those at the track, who did a perfect job today and those at home, whom I'd asked to put in a huge effort, not just for us but also for our fans. Fernando was brilliant, driving an extraordinary race and Felipe also did very well, fighting right to the very end.

Stefano Domenicali: Today is a wonderful day for all of Ferrari. Winning at such a famous circuit as Silverstone, with its rich and fascinating history, in front of an extraordinary crowd, is cause for great satisfaction. This result has been a long time coming but it's definitely not down to any miracles. We reacted after a very difficult start to the season, working very hard with much determination, all of us, including those who no longer work with us. We were competitive all weekend long and in all conditions: it confirms that everything went the right way. Congratulations to Fernando who delivered an extraordinary performance throughout the weekend and to Felipe, who fought tooth and nail right to the very last lap. The engineers say that if you are quick at this track then you can be competitive at many of the tracks on which we have yet to race. I hope that's really the case then! We don't want to do any calculations regarding the championship. We must tackle each race as it comes with this same approach, without letup. This evening we can enjoy the moment, but as from tomorrow morning, we will turn our attention to the German Grand Prix.

Fernando Alonso: What a wonderful surprise! The team did an amazing job and I dedicate this win to everyone at Maranello and at the track, whose work has allowed me and Felipe to drive such a good car. It is a very special win because it comes at a legendary track like Silverstone, in front of a crowd that is so enthusiastic about cars. Also, the track characteristics were not really suited to our car, but clearly, the improvements we brought here helped a lot. At the start, it was not easy to drive because parts of the circuit were very wet and others were only damp in parts. There were some tricky moments, like when Hamilton overtook me, but we stayed very calm all the time, convinced we could get something out of it. I only realised I could win when I came back out on track after the final pit stop. Clearly the problem at Vettel's stop helped, as did the fact that, for a long time, Hamilton kept the two Red Bulls behind him, but I have to say that in the dry we were very strong. Earlier today, I had the privilege to drive the 375 F1 and then, a few hours later, to win the same race for Ferrari sixty years later. In our team, there are children of people who worked for the Scuderia back then and they have the same love and passion for racing as there was back then. We head for Germany with our morale up and with more self confidence. The Red Bull is still the strongest car, but the improvements we are introducing are working. When we were struggling at the start of the season, we did not get downhearted, but instead we reacted: now we have reaped the rewards.

Felipe Massa: First of all, I want to congratulate Fernando, who drove a great race to give Ferrari a very important win. Sixty years ago, Gonzalez won for the first time and today history has repeated itself. I think we have made a step forward this weekend in terms of performance, both in qualifying and the race. It's true my pace wasn't amazing today, but that could have had something to do with the fact my floor was damaged, after I hit something at Turn 6; maybe a part from another car. In terms of the strategy, maybe we could brought forward the second stop a bit, but the team did not want me to end up having to complete the final part of the race on tyres that were too worn. In the end, I closed right up to Hamilton, as he was struggling, but when I was behind him, he fought and I only just missed out by a fraction on getting past him. We have to continue to push on the development of the car: there are many races still ahead of us and having improved the car means we can feel more confident about the second half of the season.