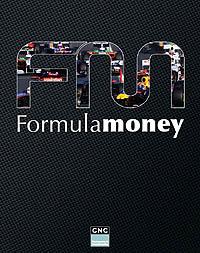 No F1 race is as associated with money as Monaco. The yachts and luxury apartments which will be seen lining the track during Sunday's race are some of the most overt reminders to viewers of the huge amounts of money flowing around the sport. However the exact details of just how much money F1 puts in the pockets of its owners has been shrouded in utmost secrecy. Until now.

Who hasn't wanted to know how much F1's boss Bernie Ecclestone made from F1 over the past five years? Or how about which race was the best attended last year? What about finding out which race makes the biggest loss or which team's sponsors got the widest exposure on television last year? The answers to these questions and many more are contained in the latest edition of F1's trade guide Formula Money which recently launched at an event hosted by London's Royal Automobile Club and drinks company Kingfisher.

Pitpass' business editor Chris Sylt and his colleague Caroline Reid publish Formula Money and its 220 pages cover all the key data about pretty much every area of F1. This includes a breakdown of every team sponsorship deal, all race hosting fees, the total resources of each team, and a comparison of team revenues stretching back 20 years. It also reveals for the first time how much F1's majority owner, the private equity firm CVC, has made from the sport since buying it in 2006.

The data shows that over the five years since CVC bought F1 the sport's revenue has increased 64.4% to £965m and it has generated £740m in net profit after all outgoings including debt repayment and interest payments. CVC used a £1.8bn loan from Lehman Brothers and the Royal Bank of Scotland to buy F1 and even after paying off £205.8m of the debt last year and making £36m in interest payments the business still made a net profit of £83.4m. CVC owns 63.4% of F1 which gives it around £470m of the profit the sport has made since it bought it.

It is an astonishing result since it could so easily have been much worse. When CVC took over F1 the teams were threatening to set up a rival series and even after this threat had been averted the sport faced a crisis due to the exit of BMW, Honda and Toyota.

Having a stable owner no doubt helped F1 through this period, particularly when compared to the disputes which characterised the tenure of the three banks which previously owned it. However, the revelation of the huge profits which the sport's owners have put in their pockets is nevertheless likely to fuel the teams' criticism of the current regime.

The teams are negotiating with Ecclestone to increase their share of F1's profits from 50% to 70%. Ferrari team principal Stefano Domenicali recently added that "a marketing partner is needed. It can be CVC...but it must invest in F1." CVC certainly hasn't been the only beneficiary of F1's accelerating profits.

Lehman Brothers had the second biggest share of F1's profits making £117.6m over the past five years. Bernie Ecclestone's Bambino family trust's share of the profits came to £65.4m with Ecclestone himself getting £24.9m in addition to a salary of £19.2m over the past five years for being the sport's chief executive. There is very good reason why he won't be increasing the teams' share.

The real question is how much profit F1 is forecast to make over the next five years and this too is in Formula Money. Pitpass readers will get the inside story on this, and all the other nuggets of news in the report, as we continue to plough through it. In the meantime it is worth reflecting on the fact that the teams' demand for higher income affects nothing less than whether F1's owners make a profit or not. Bearing that in mind, it's not hard to imagine which side is going to win that battle.