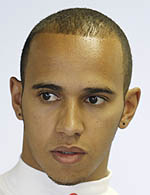 Lewis Hamilton has appointed Simon Fuller's XIX Entertainment as his new manager it has been revealed.

Famously, Fuller, who also manages David Beckham and managed The Spice Girls, was behind the infamous My Earth Dreams concept - an attempt to give the Honda F1 team a "youth orientated buzz" when in reality the idea was to attempt mask the Brackley based outfit's failure to attract sponsorship.

"It was important I took my time to make this decision as it had to be right for my career and my long-term future," said Hamilton in a brief statement. "I spoke to many interested companies in recent months but I felt Simon Fuller along with his team at XIX Entertainment not only wanted to help me become an even better racing driver, but they also shared my ambitions for the longer term."

It was just over a year ago that Hamilton ended his long-standing management deal with his father. In today's statement however, Anthony Hamilton expressed delight at his son's decision. "Lewis has wisely taken his time to find a good person to look after him. I met with Simon a couple of years back and he was then at the top of my list as my potential replacement," he said.

Talking of McLaren drivers and management, who on earth is responsible for the dreadfully naff Head & Shoulders ads that Jenson Button is currently doing.