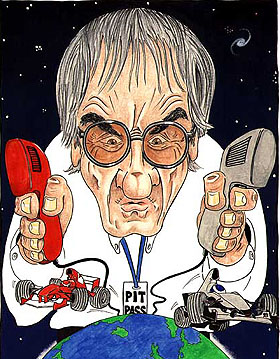 Just when you thought F1 couldn't come up with any more silly gimmicks, Bernie Ecclestone suggests that each race feature a 'wet period'.

In the eyes of many, in recent years F1 has appeared to lose the plot, annually introducing needless and costly gimmicks intended - so we are told - to improve the show.

No other sport has featured so many changes to its rules, perhaps explaining why it still fails to capture the imagination of the wider sporting public.

Still claiming that a championship based on medals rather than points would liven up F1, ringmaster Bernie Ecclestone now believes that the sport should learn from those races where changing weather conditions played a major role.

"Look at the races we have now," he told the official F1 website. "Overtaking is almost impossible because in the dry there is only one line good for maximum speed because of the rubber on the track. You have a completely different picture when it is wet. We always had the most exciting races in the wet so let's think of making rain.

"There are race tracks that you can make artificially wet," he continued, "and it would be easy to have such systems at a number of tracks. Why not let it 'rain' in the middle of a race? For 20 minutes or the last ten laps? Maybe with a two-minute warning ahead of it. Suspense would be guaranteed and it would be the same for all."

Then again Bernie, old mate, considering how former priest Cornelius Horan turned the 2003 British Grand Prix on its head, producing one of the finest overtaking festivals of all time, perhaps we should have gone to Bahrain after all.

Protestors being chased around the track and pitlane by gun toting mercenaries during the middle of the race would have livened it up no end.