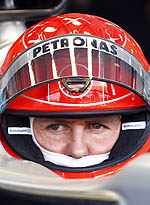 Michael Schumacher's preparations for the forthcoming season, his second since returning to the sport after three years in retirement, have been compromised by the fact that he suffers bouts of sickness when working on the team simulator.

Talking to the BBC, a Mercedes GP spokesperson said: "Throughout his career, Michael from time to time, has been susceptible to simulator sickness. It hasn't adversely affected Michael's race preparation or competitiveness with regard to his team-mate.

"Simulator sickness has affected the length of time that he can spend on a simulator," the spokesperson continued. "This is a relatively common occurrence for many people in all fields of simulator activity including military, aircraft and racing cars. The simulator is one of a number of tools which drivers use to prepare for the race weekend, but Michael has not been disadvantaged as together with his engineers he has made his simulation work effective.

"The situation has been exacerbated by the level of our current simulator technology," added the spokesperson. "For many reasons, we have invested in higher quality and more realistic simulation equipment which will be completed and available for our drivers shortly."