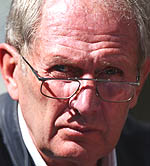 Red Bull's motor sport advisor, Helmut Marko, who reports directly to Dietrich Mateschitz, has dismissed speculation that Sebastian Vettel could head to Ferrari when his contract expires at the end of next season.

Pointing out the obvious, Marko says it would be ludicrous for the world champion to even think of heading to a team where Fernando Alonso so very clearly rules the roost.

"Sebastian is smart enough to know that the circumstances would have to be right," said the Austrian, according to the Daily Telegraph. "He is not going to change as long as Fernando Alonso is still there otherwise he would be stupid.

"It is a natural thing that a racing driver dreams of Ferrari," he continued, "and Ferrari looks at a great driver like Sebastian. But just for the legend of Ferrari, Sebastian will not leave us. While we offer Sebastian a package that is better than the others, he is not going to go elsewhere just because of someone's image."

However, while Vettel would indeed be foolish to even consider joining Team Alonso, much like the rest of us the German youngster will be looking to see whether Red Bull can build on the excellent progress made in 2010.

To have won both titles - even if they conspired to make hard work of it - the Austrian outfit clearly has almost everything in place to continue battling for supremacy in 2011 and beyond. However, other than watching to see what steps forward Ferrari and McLaren might make, there continue to be those that question for how much longer Mateschitz will continue to fund the team especially now that it has done what it set out to do, and more.

Looking ahead to the coming season, Marko is in no doubt as to where the biggest threat will come from, Fernando Alonso and Ferrari, not to mention Red Bull's tendency to shoot itself in the foot (hoof?)

"Last year Sebastian lost 66 points because of mechanical problems," he said. "These points were virtually all given to Fernando Alonso. If we can overcome those problems and not have bad luck, then we will defend the title.

"Then there is Sebastian himself," he added, "he is a year more mature and is fully back on track."