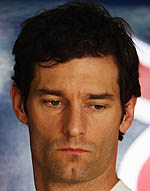 Ahead of this weekend's all important Brazilian Grand Prix, Mark Webber has appeared to suggest that his team favours teammate Sebastian Vettel, thereby reopening an old wound at a crucial time.

As Webber crossed the line to take a popular victory at Silverstone in the summer, team boss Christian Horner was heard to say: "Well done, you've won the British Grand Prix, you can smile now" to which the Australian famously replied "not bad for a number two."

The incident followed weeks of speculation regarding favouritism within the team culminating in a new wing being controversially taken off the Australian's car and being given to his teammate.

While the team has worked hard to stifle the speculation, even going to the extent of issuing a special 'clear the air' press release and issuing a cheesy photograph, the doubt, within the paddock, the media and on fans' message boards remains.

Tonight, Webber reignited that row when he suggested that his young German teammate is the favoured driver. When it was suggested that the team was not fully behind him, Webber sighed. "Technically everything's been very, very good," he said.

However, when it was then suggested that he still felt as though the team favoured Vettel, he said: "It's obvious, isn't it? When young new chargers come on to the block, that's the way it is, which is absolutely fine because I've had a great opportunity with a great car to go and do some great things this year and I have done that. I've got favourites in life. That's how it is. It's human nature.

"I think I wasn't supposed to be in the hunt, at all," he added. "So it's been maybe quite inconvenient, but I've enjoyed every bit of it."

Horner was quick to play down Webber's suggestion, subsequently telling reporters: "Mark has had tremendous support from the team. The team have given him a great car and we've done our best to give them both equal equipment.

"I'd have to understand what Mark was meaning by those comments," he continued. "He's probably referring to the support of Sebastian by Helmut Marko. But that doesn't change how the team operate. Dietrich has always been very clear, he doesn't mind whether it's the oldest or the youngest world champion. We've given both as much support as we can.

"Obviously it would have been very convenient for Mark if we'd said Seb would be his rear gunner for the last few races. But that was never going to be the way we went racing - whichever way round the drivers were."

Webber and Horner were later spotted in animated conversation behind the Red Bull motorhome.