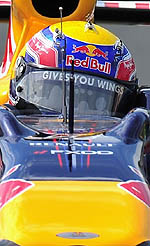 McLaren dominated both sessions yesterday, however, Mercedes were right up there. That said, all eyes are on Red Bull, the Austrian team playing its cards very close to its chest. As for Ferrari, despite the protestations that there is not a problem with its engines this year, many think otherwise following two lacklustre sessions and Fernando Alonso's failure in the morning session. Force India continues to make good progress.

Drivers are struggling for grip - as ever - while many are suffering from understeer. Tyre options are hard (prime) and soft (option).

More and more teams are no running versions of the F-duct, with Mercedes and Ferrari (Alonso only) now trying the device pioneered by McLaren and Sauber. Williams is also running a variation of the system but only on Barrichello's car.

Despite his horrific failure in the opening session, which meant we never saw him in the afternoon, Sebastien Buemi is back in the Toro Rosso and remains confident for the remainder of the weekend.

The lights go green and nineteen cars immediately pour on to the track including Vettel, Alonso, Massa and Schumacher. Indeed, all but Webber, Barrichello and the McLarens are on track.

Ten minutes into the session, all but Webber have been out. Barrichello complains that his "rear wing isn't working" and of a "smell" at Turn 11. The mind boggles.

Fourteen minutes into the session, Petrov heads down the pitlane, followed by Liuzzi, di Grassi, de la Rosa and several others. The Russian posts the first time of the day (1:44.128) but this is soon beaten by Glock (42.233) and then de la Rosa (40.788). Next time around, as one would expect, Petrov raises the benchmark with a 38.559.

As the McLarens leave the pits the times are tumbling, with Alonso going quickest with a 36.908.

Twenty-two minutes into the session, all but the Mercedes duo have posted times, but Rosberg and Schumacher are both on track.

Hamilton re-takes the top spot with a 36.075 as Barrichello continues to talk of a problem with his rear wing, his car being the only Williams fitted with an F-duct type device.

Hamilton consolidates his top spot with a 35.714 as Barrichello remains at the wrong end of the timesheets along with the usual suspects.

As Senna wrestles with the Hispania, Rosberg improves to sixth with a 36.503. Elsewhere, Williams removes the F-duct rear wing from Barrichello's car.

Buemi complains that his car is too stiff, the Swiss listing a whole catalogue of symptoms which will hopefully allow his team to sort the problem. Unlike his rivals, the Toro Rosso driver is suffering chronic oversteer.

Following a short period of inactivity, Webber gets things underway again, the Australian improving from sixth to second with a 35.939.

In the other Red Bull garage mechanics are working furiously on the left-front side of Vettel's car. A team of 'large gentlemen' attempting to keep the media at bay.

Petrov's session is over, the German losing the back of his Renault in the final corner and going head first into the tyre barriers. He's out of the car and damage looks minimal, certainly compared to Buemi's failure yesterday, but it will keep his crew busy ahead of qualifying. The session is red flagged.