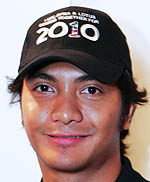 Returning to Malaysia as a Formula One driver is the realisation of a life-long ambition for Fauzy.

"I have raced many times at the Sepang International Circuit and have always dreamed of racing here as an F1 driver," admits the 27-year-old. "Now my dream has become a reality. To put the car through its paces in free practice 1 on Friday will be a massive thrill. My goal is to be an F1 world champion and this race is an important milestone in my journey to that point."

Commenting on Fauzy's appointment to the team, Lotus Racing team principal Tony Fernandes said: "We're all delighted Fairuz is our third driver and thrilled with the input he's already had. He was first on track at our shakedown, and then first on track in our very first test in Jerez, where he completed an incredible 76 laps, with no mistakes, and all with no power steering. What an amazing achievement.

"He's a real inspiration to me, to the team and to all of Malaysia, showing that it you have a dream and work hard, you can achieve whatever you want. For me now, it's not just about Fairuz being one of our drivers - he shows that we can have more Malaysians in our garage, in the factory, in marketing and when Malaysians see their countrymen working in F1, it will change their perception of where they are in the world."

In addition to his role at Lotus Racing, Fauzy has been chosen to be the Sepang Race Ambassador. As Ambassador, he will help promote the Malaysian Grand Prix as well as promoting motorsports development and road safety.

"I am privileged to be in Formula One with Lotus Racing and the Ambassador role provides me with a global stage to promote Malaysia," he said.

The popularity of Formula One in Asia is growing rapidly and 2010 will be an important season for Malaysia, especially now that the country has its own team and driver to support.

The Malaysian Grand Prix promises to be a thrilling race but also a very demanding race - for both drivers and cars. Heat and humidity will inevitably be big factors and there is a chance of heavy rain too.

"I think this will be the toughest race of the season so far," said Fauzy. "It is a high speed circuit with fast corners and breaking zones that lead to hairpin bends. With temperatures in the mid-30s and humidity of 60 percent plus, it's a demanding combination which will really test the drivers and the engines."