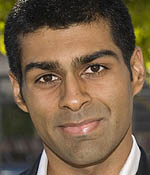 No doubt with an eye on the huge TV market, Bernie Ecclestone has called on India to get behind the country's second ever F1 driver, Karun Chandhok, as he prepares to make his debut with Hispania.

Pitpass previously reported that TV viewing figures in 2009 slumped by 13% to 520 million, mainly due to the effect of late race starts. In China, for example, races that were broadcast in the evening in Asia; "meant that Formula One was broadcast in direct competition with domestic sports such as the Chinese Football Association Super League", and that's according to the official F1 global broadcast report.

Now, ahead of a season which has everyone talking - with Pitpass user traffic in February up 69.2 percent on the corresponding month in 2009 - Ecclestone has called on India to rally behind its newest star.

"I am very happy to see that Karun has finally secured his place on the Formula One grid," the Englishman wrote in a statement. "It's been a bit last minute but the main thing is that he is there and with a team that should provide him stability and a chance to learn.

"While I believe it's going to take Karun until mid-season to be able to show his potential," he continued, "I wish him all the very best for this season and look forward to seeing the Indian media and public get behind him this year."

Chandhok, follows in the footsteps on Narain Karthikeyan, a former Formula Ford Winter Series and Formula Asia champion, who made his F1 (race) debut with Jordan in 2005 following previous tests with Jaguar and Minardi.