Domenicali refusing to get carried away 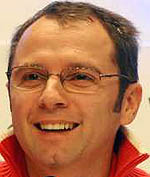 While Ferrari boss Stefano Domenicali is delighted to see his team top the Valencia timesheets this week, he refuses to get carried away insisting that there is still a long, long way to go.

The message after the first 2010 session is clear, to stay realistic and remain focussed. Nobody at Maranello is deluding themselves, the road to recovery after 2009 is still long and difficult. Consequently, after the three-day test in Spain, the feeling within the team is positive but cautious.

"We know very well that test lap times, especially this year, have to be handled with care," said Domenicali. "Using an Italian expression from football, we're still in 'August football'.

"We can't forget where we were in terms of performance at the last GP last year," he continued. "There is still a lot of work to do to close the gap and there are still many problems we have to solve. And then we don't know the petrol loads the other cars had on board, so it's impossible to get a clear idea of the relative strengths on the track. Maybe someone also wants to play hide and seek and some still have to present their cars."

Usually the first test session is used to collect as much data as possible in order to start verifying the car's behaviour on the track. This is the direction that most teams are taking. However, while he isn't carried away in terms of the F10's pace, Domenicali is delighted with the cars early reliability.

"If there is one thing we're really satisfied with then it's the reliability the car has shown," he said. "The 1,400 kilometres driven are a very good start and we need to ensure that the intense work at the test and in terms of simulations over the weeks before the debut on the track, will bear fruit.

"In Valencia we also started to get to know the new Bridgestone tyres' behaviour also related to the petrol load. But the data is still absolutely relative: this track is not particularly demanding on the tyres and the temperatures weren't the ones we'll have during the season's first three races."

Asked about his two drivers, Fernando Alonso and Felipe Massa, the Italian said: "They were both very happy with how things went. Especially regarding the car's reliability. They are both extremely motivated and have a great desire to drive: it would have been frustrating if we hadn't started on the right track here. Both, Felipe and Fernando, know that we have to work a lot and they already gave many indications where we have to improve the car.

"There are no miracles in Formula 1," he concluded, "if you want to be fast you have to work hard for months and months and then you'll meet your competitors, who have as much capacities and are as motivated as you. We can't take anything for granted and we shouldn't delude ourselves by indications, which could be completely misleading. We can't work like in football where two good or bad results are enough to pass from riches to rags or vice versa."