Haug to be patron of Germany's F1 in Schools 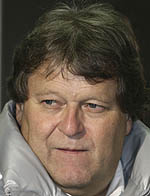 Norbert Haug has agreed to be a patron of the F1 in Schools Challenge in Germany. He joins a roster of top names in Formula 1 who are already patrons of the global educational initiative, including Ross Brawn, Mike Gascoyne, and Adrian Newey.

Haug said of lending his support to F1 in Schools, "Formula 1 is a technically sophisticated sport which attracts highly qualified engineers who have a passion for motor racing. F1 in Schools is definitely a great initiative to motivate students to envisage an engineering career in Formula 1. It is never too early to train in the basic skills you need if you want to become an engineer one day.

"F1 in Schools provides the ideal basis for young people worldwide to prove their engineering talents in a very competitive environment and lead them up to the technical side of Formula 1 in a way that is real fun. I really appreciate the work that is done by F1 in Schools which also is of great social value.

Andrew Denford, Founder and Chairman, F1 in Schools says of Haug agreeing to become a patron of F1 in Schools, "We are very grateful to Norbert Haug for linking with F1 in Schools and in particular Formel 1 in der Schule, the challenge which takes place in Germany, just one of over 30 countries in which we operate.

"This comes at a very exciting time for Mercedes-Benz Motorsport and Formula 1, with the manufacturer now having their own team in the FIA F1 World Championship, led by another of our patrons, Ross Brawn. Norbert has been involved in Formula 1 for over 15 years and has a great depth of knowledge and passion for the sport. We know that he will be inspirational to all the students who participate in our F1 in Schools programme and thank him for giving us his support."