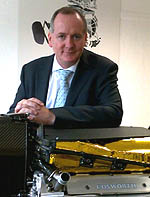 Gregor Veble: Mark, what are the main upgrades that Cosworth need to introduce to their last, unrestricted 2006 F1 engine in order to be competitive? How similar will the new Cosworth unit be to the one last used in the Williams car?
Mark Gallagher, Cosworth Formula 1 Business Unit: The CA2006 design has of course formed the basis of the 2010 engine, but with the reduction in rev limit to 18,000rpm, much longer engine life and tremendous demands on reducing fuel consumption, it has been significantly re-engineered. There is a common view that reducing the rev limiter somehow makes life easier, but in fact making an engine work to a different set of requirements is not the work of a moment. A lot has been changed - so although it will look similar, it's only skin deep.

GV: Will Cosworth provide an engine that can compete with the best current units?
MG: Well that's our aim otherwise we would not be returning to F1. Obviously it is an enormous challenge, but the limitations on development mean that the current engine providers have been restricted and that has improved our opportunity to close the gap as we re-engineer the CA engine. The new teams we are working with do not want to prop up the back of the grid, and we want to give them the best opportunity possible to move forward. None of this is easy, but I believe the integrity of our engines will add much to their overall package.

GV: What are the expected strengths and weaknesses of the unit compared to the competition?
MG: We want the engine to be competitive, reliable and fuel efficient, but until we finish our development and build programme and see it actually tested in our customer's cars we won't be able to say for sure how it compares with the opposition. The CA was a very good engine in 2006, and in its latest evolution we are quietly confident it will perform well.

GV: With refuelling banned, how much of a trade-off is needed between performance and consumption when designing the engine, or do the two aspects go hand in hand due to RPM limits?
MG: As ever the engineers in the teams want it all - power, fuel efficiency and of course perfect reliability. There comes a point in developing the power where you reach a particular target and then have to consider whether making further changes for the sake of half a horsepower are worth it compared to the same effort going into making the engine more fuel efficient. There's always a trade off, particularly when you are working within a finite development budget and pretty tight time constraints. The first race of 2010 is in 22 weeks time, so the development cycle is beginning to close down as we move into manufacturing and delivering the engines to the teams.

GV: Does the standard ECU present a challenge when developing an engine? Or, to put it differently, does the standard ECU present an advantage for an engine developed specifically with it in mind?
MG: The standard ECU has not been an issue for us. In some respects it makes life easier - it is one less variable, one less thing to think about. The people at MES are good to work with, the ECU has not posed any issues and I think that when you are doing what we are doing - developing an engine for a number of customer teams - it has an appeal for us.

GV: Will Cosworth be providing a KERS solution with their package, assuming KERS isn't scrapped?
MG: KERS is one of the technologies we can offer, but it's not being provided on the 2010 engine. Formula One is not our only area of operation and KERS is being sought in other categories of racing along with other new technologies. Given Cosworth's move into the aerospace, defence, marine and energy sectors in recent years, it's important for us to also maintain our role at the leading edge of racing technologies such as KERS.

GV: What direction would Cosworth like to see the F1 engine rules develop in the future? Is energy recovery a direction that F1 should try and develop further? Should fossil fuels be removed from F1?
MG: We are in a new era when simply refining existing engine architectures is not going to be enough to maintain interest and sustain R & D budgets. We would prefer to see a set of regulations that drive engine development towards solutions that are both relevant to the wider needs of the community as well as providing the performance sought by teams. It would be a very great shame - and an opportunity lost - if we allowed recent KERS experiences to cause F1 to shy away from trying new, innovative technologies. We have a great opportunity to demonstrate that it is possible to be green and go fast at the same time.

GV: Cosworth used to be almost synonymous with Ford in F1. Will Cosworth try and align themselves with a car manufacturer again?
MG: Possibly, but it won't be a relationship we rush into because the Cosworth brand now has appeal beyond Formula One and the automotive sector alone. We would want to partner with an organisation committed to developing the kinds of products that would allow us to really demonstrate the capabilities of Cosworth and genuinely improve the product. It's very interesting to note how widely recognised the Cosworth brand now is.