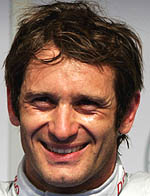 Ahead of today's opening free practice session, the air temperature is 17 degrees C, while the track temperature is 20 degrees. It's cool, fairly bright but quite a bit of cloud. Then again, this is Spa.

The tyre options this weekend are medium and soft, this being the first time that the these have been used in a consecutive allocation for a race.

Historically, the cool conditions will not suit the Brawns, however, at Valencia Jenson Button claimed that the Brackley team had gone some way to solving the problem. We shall see.

The lights go green and as ever the Force Indias lead the way, followed by Sutil, Buemi, Kubica, Glock and Alguersuari.

Having used seven of his eight allotted engines, it will be interesting to see how Sebastian Vettel fares this weekend. In theory, this circuit, and the weather conditions, should suit Red Bull, especially after its nightmare weekend in Spain. However, with an eye on the engine situation, it is likely that Vettel's running will be strictly limited today and in the free practice sessions at Monza.

After two 'slow' tracks it will be interesting to see how McLaren performs this weekend, both drivers thought to be using the longer wheelbase car this weekend.

Five minutes into the session, all but Barrichello have been out for an installation lap. That said, moments later the Valencia winner heads down the pitlane.

Fifteen minutes into the session, Alguersuari is the first driver to go out for a second run. Shortly afterwards he is joined by Glock.

As Alguersuari posts the first time of the day (2:00.275), Buemi, who has just left the pits, is warned that rain is expected in ten minutes. Hamilton also on track.

Alguersuari improves to 1:56.059 as Button leaves the pits and Hamilton returns. It is unclear at this stage whether a brief rain shower is expected or a 'proper' downpour.

1:53.552 for Alguersuari as Barrichello leaves the pits followed by Raikkonen and Trulli. Alonso and Badoer also head down the pitlane.

One by one cars pour on to the track, and pretty soon Alguersuari is joined on the timesheets as the times begin to tumble.

It's reported that it is raining at Stavelot as Trulli goes quickest (49.675), ahead of Button, Alonso, Buemi, Alguersuari, Barrichello, Raikkonen, Kovalainen, Kubica and Badoer.

Thirty minutes into the session, with ten names on the timesheets, the rain is falling harder now and across much of the circuit. Consequently, the session is declared wet.

As the rain falls ever harder and thick cloud shrouds most of the track, there is no action as driver wait patiently in their pits.

On the hill around the circuit, races fans, already wrapped up in their waterproof windcheaters are now huddles beneath their umbrellas.

Forty minutes into the session, Alguersuari heads down the pitlane again, his Toro Rosso fitted with a set of full wets. This is the young Spaniard's first time in an F1 car in the wet.

Barrichello is the first driver to run with Intermediates, as Badoer is told that if his wets begin to grain he should head back to the pits and save them. Clearly, the Maranello outfit believes there will be lots more rain before the weekend is over. The Italian subsequently locks up at Les Combes and has to use the escape road.

Barrichello completed just one lap on the Inters before returning to the pits leaving only the Toro Rossos, Badoer and Webber on track.

As Trulli and Raikkonen leave the pits, Buemi spins off at the exit to Pouhon. Luckily, other than a broken front wing, there is little damage to the Toro Rosso and the Swiss driver is able to head slowly back to the pits.

Coming up to the one-hour mark, Button is back on track, as are Hamilton, Alonso and Kubica. Although the rain appears to be easing, indeed, stopping on some part of the track, Kubica is told that the rain will continue for the rest of the session.