Domenicali: No automatic entry for Ferrari 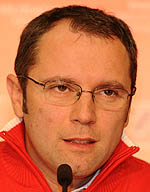 Attending a meeting in London today, Ferrari team boss Stefano Domenicali denied claims that because of an outstanding contract with the FIA his team will automatically be included in the FIA's entry list for 2010 when it is revealed on Friday

“Ferrari’s position has not changed," said the Italian. "Back on 29 May, we put in a conditional entry with the other teams that make up FOTA. Along with this entry, we put forward to the FIA a package of proposals which included among other elements, a significant reduction in costs. As always, we will do all we can to find a solution that is acceptable to all parties. If this is not possible, then the FIA will not be able to include Ferrari in the list of teams entered for the 2010 FIA Formula 1 World Championship.”

When considered in relationship to our two previous reports concerning Renault, it appears that FOTA is still very much up for the fight.