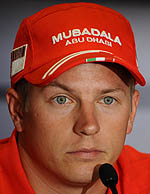 2007 World Champion Kimi Raikkonen has admitted that he is unhappy with the FIA's plans for the future of F1, particularly the introduction of a budget cap, warning that such a move could force him to leave the sport.

"This is not F1 anymore," he told BBC Sport. That's why there is a question mark. Nobody seems to know what kind of rules we are going to get. We'll see what happens."

The Finn is the latest driver to admit unease with the FIA's proposals, although, the majority of those not in favour of the FIA's plans are employed by the bigger teams who would be hit hardest by the rule changes.

For 2010, the FIA is aiming to introduce a £40m budget cap which would give those teams that adopt it almost unlimited freedom, providing they don't exceed the financial limit. On the other hand, those teams that opt not to adopt the budget cap will be severely limited, effectively creating a two-tier championship. Already some of the manufacturers warning that they might need to re-think their participation in the sport with Ferrari already looking set for a head-on clash with FIA President Max Mosley.

Asked for his thoughts on Ferrari's position, Raikkonen, who has a contract with the Italian team for 2010, said: "I don't know. There are a lot of question marks and I'm not the guy to answer those."

"There needs to be a reasonable budget for everybody," he admitted. "It would be nice to get close racing; we are getting there now but it still needs to improve. But it's hard to put the bigger and smaller teams on the same level as it's very difficult to make everybody happy."

2099 has seen the Maranello outfit experience its worse start to a season since 1981, asked if his team can make up lost ground and actually start challenging the current pace-setters, Brawn and Red Bull, Raikkonen appeared confident.

"We can win races this year," he said, "but I'm not so sure we can fight for the championship. The next few races will show which way we are going to go but we know it is going to be difficult.

"Some teams are faster than us now and it's never going to be easy to catch them up," he admitted. "We're not as happy as we were last year but the atmosphere in the team hasn't changed. There is always some motivation - we don't give up that's for sure."

With the Finn still looking a shadow of the racer who took the 2007 title, there is still speculation as to his future in the sport, budget cap or no budget cap.