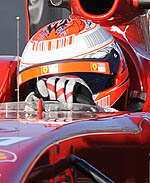 Ahead of today's second free practice session, the air temperature is 33 degrees C, while the track temperature is 45 degrees C. It's hot, humid (55%) and sunny. Once again, there are a few dark clouds in the distance, but this time they do look threatening.

A few stories are currently breaking, the biggest - though not officially confirmed - is that McLaren sporting director Dave Ryan been suspended by the team. Ryan, who represented the Woking team at last week's meeting with the stewards, joined the outfit in 1974.

As a follow up to the first session, Raikkonen's problem, when his fire extinguisher went off, is understood to be KERS related, while Nelson Piquet suffered a wheel rim failure.

Kovalainen flat-spotted a tyre, and as his team wanted to do tyre comparison this afternoon, they didn't want to use up another set of tyres this morning so they didn't allow him another set. And talking of McLaren Lewis Hamilton has been hit with a 1,200 euro fine for exceeding the pitlane speed limit.

The lights go green, and within seconds cars are streaming on to the track, including Kovalainen and Alonso, who is still suffering from that ear infection.

Kovalainen posts 39.810, Piquet second and Bourdais third. Lots of action, which is probably due to those dark clouds in the distance.

Massa posts 38.891,however, within seconds, Rosberg, Nakajima, Webber, Vettel and Sutil have gone quicker. Once the smoke settles - as opposed to fire extinguisher powder - Fisichella tops the timesheets with a 38.195.

Nine minutes into the session and all but Barrichello have posted a time, and he is heading down the pitlane.

On board with Button and a few spots of rain hit the camera lens. Meanwhile, Hamilton goes quickest, ahead of Raikkonen and Rosberg. Button goes fourth, ahead of Vettel, Nakajima and Kovalainen.

There's a big black cloud overhead, but other than those few spots of rain earlier, nothing of any substance. Indeed, the teams are not predicting rain at this time.

Trulli goes quickest in the second sector, and again in the third, crossing the line at 7.185. The Toyotas continuing to show strong form.

A 37.363 sees Sutil go second, as the frantic activity continues. Moments later it's a Force India 2-3 as Fisichella posts 37.432. Hard to tell but Sutil appears to be on the softer option tyre as he improves to 36.899.

Webber (soft) goes quickest overall, having gone quickest in the final two sectors. Meanwhile, those big black clouds are closing in, with rain clearly falling just a little way away from the far side of the circuit.

Vettel goes third (37.183), but is almost instantly demoted by Nakajima who posts 37.129, having gone quickest in the second sector. However, the German soon re-takes the position with a 37.084.

The BMW duo, along with the Toro Rosso duo and Alonso, are all at the wrong end of the timesheets.

Some of the cars still looking twitchy, while there are also quite a few lock-ups and minor excursions. Indeed, Trulli is a good example, the Italian taking a long trip through the gravel trap at Turn 6.

Kubica complains of lots of understeer, and a general lack of grip, as Bourdais goes off at Turn 9.

As one of the Brawns has a big twitch, Hamilton is warned that there's rain on the way. Meanwhile, Raikkonen goes quickest with a 36.523.

Nakajima, Barrichello, Rosberg an Hamilton all on good laps. The Japanese driver goes quickest with a 36.334, as a big black cloud appears to park itself right on top of the track.

Currently seventeenth, Alonso goes quickest in the first sector, finally crossing the line at 36.640 to go fifth, having lost time courtesy of a sloppy final corner.