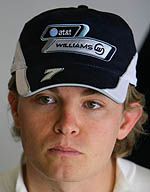 Nico Rosberg is concerned that this weekend's Malaysian GP, which will take place at the later time of 17.00, could end in mayhem.

As with the Australian GP, the Malaysia event is being held at a later time than usual this year in an attempt to draw a bigger TV audience in the sport's European heartland. Whereas the Sepang event normally gets underway at 15.00 (local time) meaning it is seen at 07.00 (GMT) in Europe, this year's event starts at 17.00 (local time) which means a breakfast-friendly 10.00 (BST) start in the United Kingdom.

Other than the failing light, Rosberg is concerned that should the weather forecasters be proven right and tropical storms lash the track the event could result in carnage.

"If the monsoon comes down, the race is going to have to be stopped because we can't race and drive with that amount of water," the German told Reuters en route to Malaysia for the second round of the 2009 season.

"I think twilight racing is not the way to go," the Williams driver continued. "In Melbourne it was obvious that it just increases the danger so much. The visibility is so difficult, you can't even see the edges of the track in some corners. I was driving into the sun and that's not what racing is about. So I really hope they reconsider that.

"Even moving it forward by one hour or something will help us massively," he added. "It was just the last part of the race that was the really problematic time."

It would be nice to think that Rosberg is simply indulging in a little bit of doom-mongering, however, the fact is that there are many who share his feeling that starting races at the this time of day, especially during the Monsoon season, is an accident waiting to happen.

Now that the Grand Prix Drivers' Association has caused the FIA to relent and reassess its plans for a hike in the cost of its superlicences, perhaps it could concentrate on what the organization was first set up for in 1961, driver safety.

Race fans in Europe have managed perfectly well up to now, getting up in the early hours to watch one or two races a year, unlike their counterparts in the East who are forced to miss their sleep week after week just to see an hour of edited highlights.

Twilight racing, like night racing, is a gimmick. Sadly, as we said before, it is also an accident waiting to happen.