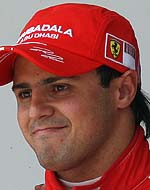 "I have had a busy time since winning in Valencia and now, from that completely new street circuit, we go to one of the oldest and most challenging tracks in the world at Spa," writes Felipe Massa, in his latest blog for the Ferrari website. "In between these two races, I spent two days testing in Monza last week and generally the results were positive, although my work load was aimed entirely at the Italian Grand Prix and I did not really try anything specifically for the Spa circuit. Even though I was concentrating on the demands of the Monza track, we did a lot of mileage which was important from the reliability point of view for this weekend in Belgium, especially on the engine front.

"Last year, I finished second in Belgium and in the past I had a fourth place when I was driving for Sauber. Like most of the drivers, I think this is the best circuit on the current calendar and I love the track and it's great to be going there. It's always nice to be at Spa and I have good memories of last year, when we had a competitive car and the team got a one-two finish. I hope we can repeat that performance and have a car that is good enough to keep ahead of the McLarens, which of course is our main target at the moment. I will also be hoping to be ahead of my team-mate, but Kimi has always been quick at Spa, not just in Formula 1, but he was also a winner here in the junior categories and he has won the last three grands prix at this track. So for sure, it won't be easy to beat him and I am looking forward to a good battle with my team-mate. The F2008 should be competitive and our aim will be to bring home as many points as possible for the team.

"You cannot talk about Spa without mentioning the rain: if it's just steady rain, the track is not too difficult to deal with, but sometimes the rain in Spa comes with fog and that makes visibility very poor and it's not too comfortable to drive in. As a team, all we can do is to be as well prepared for any situation that might occur, including the possibility of rain at the back of the circuit and nowhere else, which I have encountered before. I remember watching a GP2 race run in those conditions and it was pretty interesting! We need to keep an open mind and be ready to react quickly if the weather changes suddenly.

"Spa is not a circuit where you can do so many laps in practice, because it's such a long track and apart from the time restriction of the length of the practice sessions, you also have to think about the mileage on the engine, at least after Friday. This also means you have to plan your work on the track very efficiently and make any changes to the set-up very quickly, so as not to waste too much time in the pits. The track length also complicates race strategy as a fuel difference of one lap could end up costing you a lot of time, which means that strategy is even more important than usual. On top of that, because driving the track is in itself so challenging, you really need a good car to be competitive; one that gives you plenty of downforce for the changes of direction and the many quick corners. The car really needs to be very well balanced. If we can put all these elements together from Friday morning through to this coming Sunday afternoon, then I believe we can have a really good weekend in Spa. I'm looking forward to it."