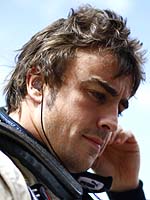 Many of us, maybe even Kimi Raikkonen, if the truth be told, were surprised, when, following the second round of pit-stops in Sunday's Hungarian Grand Prix, the Ferrari driver emerged ahead of Fernando Alonso.

Alonso pitted on lap 50 and the Finn a lap later, however, far from putting in a super-fast lap on his in lap, the Ferrari driver actually ran wide at Turn 2, losing precious time.

Consequently, when Raikkonen emerged from his stop ahead of his Spanish rival, there were bemused faces, particularly in the Renault pit.

Now, according to the Spanish media, Renault is to investigate how Ferrari turned its driver around so quickly.

Diario AS quotes Alonso as saying: "I don't know how they did it. However, We will study the data very carefully and see if they have something that allows them to fill up faster."