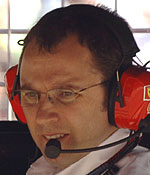 How much warning did Felipe and the team have that something was going wrong?
Stefano Domenicali: Zero. Unfortunately we had no warning, we just had the smoke in front of us, and it was very bad. Unfortunately there was no signal, no information, no warning on the telemetry.

Do you know what the problem was and did Kimi have any problems?
SD: At the end, we told him to take it easy because we felt that we had a mechanical problem at the rear of the car so we didn't want to take any risks and bring the car home after what we saw unfortunately with Felipe on the same lap.

How important is the track temperature in terms of deciding the relative performance of Ferrari and McLaren?
SD: I don't know. For sure it's easy to take the conclusion that in this condition we are going fast and they are going in any case, so for sure, as we said, what we need to improve is looking ahead, above all at the next Grand Prix where tricky conditions maybe there in terms of temperature, in terms of situation, weather, something like that. For sure we need to prepare our cars and tyre set-up maybe in a different way because we saw what we suffered, for example, in Germany.

But it has nothing to do with the engine problem?
SD: No, no, no. Completely different.

After the start of the race, when you saw Massa in first place and he opened up the gap to both McLarens, were you surprised? Did you think that Hamilton could stop some laps after Massa?
SD: To be honest, you never know up to the moment that you stop. We prepared the race last night considering that. We knew that in these conditions, the two effects were relevant, we tried to simulate the start in terms of lines because we knew that if we were in front we could have done a good pace for the first stint of the race. We were building and informing Felipe of the gap behind to Hamilton just to create our race, expecting him to be, I would say, in the region of our pit stop, maybe one two laps more, one two laps less, so we were working around that strategy, so we were building up, considering that situation. I have to say that I told before to your Italian colleagues that we are very sad for Felipe because in my view he did the best race of his career today. It was fantastic the way that he attacked when he had to attack, and he managed the race at the moment, so we are very disappointed for that.

Going into Valencia, what do you focus on now that there were reliability problems today and Kimi was talking about his qualifying?
SD: I think both, not only these two points but for sure reliability because we cannot accept to have this kind of problems, even if it was only 10 kilometers from the end, we cannot have this problem of reliability because we are paying too much of a price for it. And on the other hand, qualifying is crucial and the difference today was really the fact that on one side we were able to jump in front and do our race as we were able to do, and on the hand, in the first part in the middle of the field, knowing that it was really impossible to do something, in spite of having the right pace.

Do you think that since Felipe's victory in France and the fact that he's leading the championship, he has changed his status and he's is stronger than before?
SD: I think that he's very strong. This kind of race, if you are able mentally to manage after the big disappointment you have you do a step forward, because you get stronger. This is what we are going to do all together, because that's the way we are going to approach the next race in Valencia.