Max's first F1 support... and guess where it comes from 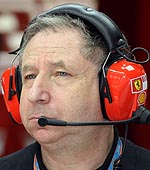 Under-fire FIA President Max Mosley has received his first public support from a personality closely connected to F1 and it's sure to re-open the debate about whether the federation favoured Ferrari. On reading through the pages of yesterday's Le Journal du Dimanche, Pitpass contributor Christian Sylt came across a glowing endorsement of Mosley given by none other than former Ferrari sporting director Jean Todt.

"He is very intelligent and of rare elegance. A gentleman" says Todt adding that Mosley never gave him the impression of being anti-Semitic. Although sceptics may point to Mosley's long friendship with Todt, he has every reason to be impartial over this matter since he is the son of a Jewish Pole.

Todt supports his defence of Mosley by saying that he is "astonished to see that things which have nothing to do with the importance of his job are being focussed on." And as far as Todt is concerned Mosley shouldn't just stay until 2009.

Darting around the question of whether he is favourite to take over from Mosley, Todt simply says "that is not the question. If you ask me whether I am happy with the actions of the FIA president in his job, I consider that he does very good work. Therefore I hope that he will have the opportunity to continue his work for numerous years."

A ringing endorsement indeed. Whether any F1 team principals will follow suit remains to be seen.