Bernie bowled out by cricket 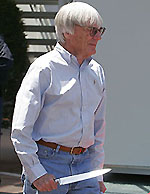 If F1 needs any proof that it's not in the best position to withstand knocks thrown at it by last year's spy saga(s) and this year's sex scandal then this is it.

According to an article in the Independent newspaper by Pitpass contributors Christian Sylt and Caroline Reid, the UK government's Office of Communications has released a report showing that F1's broadcast deal with ITV is worth less than that for Six Nations and even English cricket. In fact, F1 sits right at the bottom of the list of the UK's top ten most valuable sports rights.

Yes, you did read that right, F1 isn't making masses of cash from its TV rights in the UK. But that's not as surprising as it may seem. The list is dominated by the FA Premier League which costs Sky and Irish station Setanta a combined annual total of £669 million - six times the size of the second largest deal which is football's World Cup. Football accounts for 85% of the total value of the top ten deals and F1 hardly gets a look in.

ITV is currently paying an estimated £29 million to broadcast F1 with the rights to rugby's Six Nations and English cricket getting £40 million and £52 million respectively.

It goes to show that the powers that be behind F1 still have a long way to go before breaking football's sporting stranglehold. What is perhaps more surprising is that, according to Ofcom's report, over the last ten years the value of the rights to English cricket has more than tripled whereas F1 has only managed to double its worth.

The latest statistics show that in 2007 F1 had 597 million unique viewers worldwide in 2007 - up just 1.5% on the previous year. So perhaps F1 coverage has saturated the market.

Bernie Ecclestone's recent big bucks BBC F1 contract, believed to be worth around £35 million per year, should accelerate the sport up the rights value rankings. But if he wants F1 to hold a candle to football, perhaps his next move will be to take a leaf out of the FA's book and offer rights for 'bundles' of races.

One thing that's for sure is that knowing how feisty Ecclestone is F1 won't stay behind cricket for long.