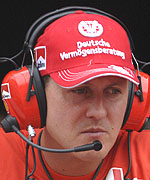 While Mario Theissen has made it clear that his team's main aim for this season is its maiden win, BMW's highly successful start to its 2008 campaign has many speculating that in just its third season the Munich outfit is a serious challenger for the World Championship. Not so, says seven-time champ Michael Schumacher.

"BMW here and there will have a few highlights, maybe more than we think," the German told Reuters. "But calculating all things, I believe, no, they cannot sustain it over the season."

The 39-year-old, who drove for three teams during his sixteen season F1 career, believes the title fight will be a two-way affair.

"I believe it is a straight fight between Ferrari and McLaren," he said "There will be no other team fighting realistically towards the end of the championship."

It wasn't all bad news for German race fans, however, for Schumacher believes that Toro Rosso starlet, Sebastian Vettel, will shine.

"I think my German team mate Sebastian Vettel particularly will be a lot of a surprise this season," he said. "He is going very well despite the results. He went very well in Australia and Malaysia until retirement. In this respect I think he will be the surprise of the season."