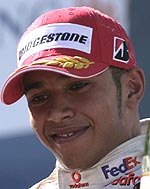 Just twenty-four hours before the British Grand Prix weekend kicks off, F1 supremo Bernie Ecclestone has said that the row which threatens to overshadow the race (if not the season), will have no impact on Lewis Hamilton's World Championship bid, or, presumably, that of his teammate.

As the saga continues, with claims that "hundreds" of technical drawings relating to the F2007 were found at (McLaren chief engineer) Mike Coughlan's home, there is speculation, particularly among race fans, that any allegations of cheating could impact on the young British rookie currently leading the World Championship.

Although McLaren has strenuously denied any involvement and said that it will fully cooperate with any investigation, for some the doubts will still linger.

Yesterday, the FIA announced that it will initiate its own enquiry, which will focus solely on the requirements of the International Sporting Code and the Formula One Regulations.

However, in a clear bid to reassure race fans that Hamilton's World Championship hopes are not in jeopardy, Ecclestone has said that should it be discovered that McLaren benefited from the information passed to Coughlan, its driver would not lose out.

"I don't see that," he told The Times. "Firstly, they (the FIA) have got to prove that if any information was given by Ferrari, it was used. And if it was used, did it affect in any way the performance of the car and, if so, where?

"In that case they could take away constructors' points from the team. But there is no way it would affect the driver," he added. "It is nothing to do with the driver - he's got a car, he gets into the car; he has no idea."

Referring to the FIA's investigation, Ecclestone said: "It will be dealt with in the correct manner. What is important is that there are no mistakes made. If somebody is saying, 'You did something wrong', we need to make sure we know what we are talking about.

"We don't want to go in there firing a gun with no bullets in the chamber," he continued, seemingly as confused by the whole affair as the rest of us. "We don't know the McLaren side of things or the guy who allegedly took the drawings - is it him personally? Or is McLaren involved? Ron (Dennis) says it's not McLaren - he's completely transparent - and if it's the guy himself, did he buy them? Did he know they were stolen when he received them? Because he is in just as big trouble as the person who stole them, isn't he?"

Hamilton fans will be delighted to hear Ecclestone giving his own personal seal of approval to the youngster's hopes - especially as we all know that what Bernie wants, Bernie gets.

However, let's not forget that it is just over a month since Ecclestone called on the powers that be to punish McLaren severely should the Woking team be adjudged to have 'fixed' the outcome of the Monaco Grand Prix.

"If there were orders," he said, and let's not forget he was referring to one race, "they would be getting off lightly if they get the same sort of fine as Ferrari. They could be excluded from the championship or they could have points deducted. A fine for McLaren, with its money, would not have the same effect as docking points."