Kubica aiming to race at Indianapolis 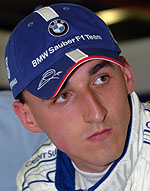 On his release from hospital today, just twenty-four hours after his horrific accident in the Canadian Grand Prix, BMW driver Robert Kubica told reporters that he hopes to compete in this weekend's United States Grand Prix at the Indianapolis Motor speedway.

"As you see I'm quite in good shape," said the Pole, "and I'm hoping to be going to Indianapolis if the doctors say it's OK.

"I feel very good," he added. "I was very lucky, it was a big accident, but fortunately, nothing is hurt.

Asked if he remembers the details of the accident he replied: "nearly everything"